Gerald Resnick (center) has filed suit against United Airlines after the airline cancelled tickets for a return flight from San Franciso for him and his son Alex (right) without notice. Vincent Antoniello (left) is his attorney on this matter.

Gerry Resnick, 64, and his son Alexander, 30, travel once a year to attend a New York Giants away game.

This year it would be a game against the Oakland Raiders, so the Resnicks and three other father-son pairs booked flights to San Francisco.

The Resnicks used Expedia to arrange round trip flights on United Airlines. They’d depart from Newark Liberty International Airport on Nov. 30 and head back to Jersey on Dec. 4. The full cost: $780.76.

It didn’t go as planned.

The older Resnick wasn’t feeling well on the departure date. He decided to skip his flight out and catch one the next day. Alexander Resnick, though, would take the originally scheduled flight.

“I checked in at one of the kiosks at the airport,” Alexander Resnick said. “They printed out both my father’s ticket and mine, so technically he was checked in for the flight.”

The younger Resnick said he proceeded to the gate, and told the United representative that his dad was ill and would not make the flight, but would take another the following day.

“I then specifically asked them whether or not him not flying would be a problem, and would he still have his return flight, to which they said it will not be a problem,” Resnick said.

Well, it was a problem.

Gerry Resnick never called United to change the flight, he said, because he knew there would be a change fee. Instead, he booked a flight on a different airline, using points so he wouldn’t have to lay out any more cash. He planned to eat the cost of the missed flight. 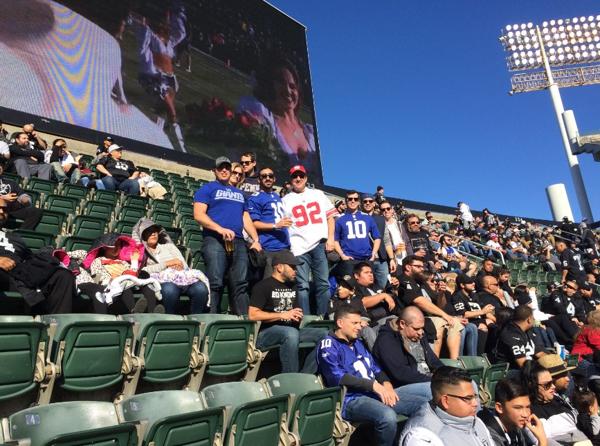 Gerry and Alexander Resnick and their friends at the Giants game in Oakland in early December 2017.

The Resnicks reunited in California with all their friends. The Giants lost 24-17.

When the trip was over and the Resnicks arrived at the airport for their flights home, they were in for a surprise.

“We were told that the reservation had been cancelled,” Gerry Resnick said.

Not only Gerry Resnick’s reservation, but Alexander’s was cancelled, too.

“The agent in San Francisco was very nonchalant, telling us that we could purchase two additional one-way tickets, but that there were no longer any seats on that flight,” Gerry Resnick said.

The agent said the rep in Newark should have noted in the computer that they both planned to make the return flight.

But that didn’t happen, so they were stuck.

The Resnicks were not happy.

“I purchased two round trip flights and the fact that I could not make one leg of the trip should not knock out the whole reservation, especially for my son who did make the first leg,” Gerry Resnick said. “This is especially true where they received notice that I would not make the outbound trip but would make the return.”

Resnick, an attorney, said he didn’t get any help from United reps after spending significant time on the phone. 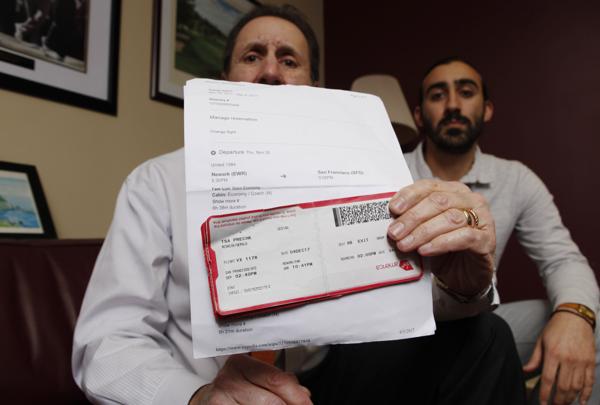 Gerry Resnick (left) filed suit against United Airlines after the airline cancelled tickets for a return flight from San Francisco for him and his son Alexander without notice. He holds the tickets that he was forced to purchase to get home and the paperwork for the original flight.

He decided to file a lawsuit in Superior Court in Essex County on March 9.

First, it alleges United breached its contract with the Resnicks because United cancelled the reservations.

The suit also alleged United benefitted from “unjust enrichment” because United was able to sell the seats a second time after cancelling the Resnicks’ fully paid tickets.

Beyond his own losses, Resnick said he thought something was wrong with the airline’s policy.

“What would happen if the head of a family booked a trip for his entire family and was unable to make the outgoing flight?” Resnick asked. “Would that mean that the whole family’s reservations would be knocked out upon their return?”

We reached out to United, presenting hypothetical facts based on the Resnick case to see exactly how the airline’s policies work.

Spokesman Robert Einhorn said a customer would have to change the round trip ticket with a new departure date in order to keep the originally booked return flight.

“If the outgoing flight wasn’t changed, the passenger would have been marked as a no-show for the flight, and the return would be automatically cancelled,” Einhorn said.

But that didn’t explain why Alexander Resnick’s return flight was cancelled.

We asked again, and the spokesman pointed to this policy:

“Failure to Occupy Space – If a Passenger fails to occupy space which has been reserved for him/her on a flight of UA and UA fails to receive notice of the cancellation of the reservation before the departure, or if any carrier cancels the reservation of any Passenger, UA may cancel all reservations (whether or not confirmed) held by such Passenger on the flights of UA or any carrier for continuing or return space, provided UA or an authorized agent of UA originally reserved that space.”

We mentioned the lawsuit, but because of the suit, the spokesman said he couldn’t comment further or with specifics of this case. 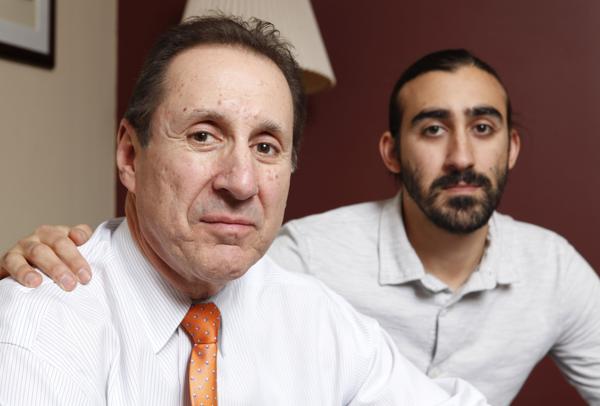 Gerald Resnick (left) filed suit against United Airlines after the airline cancelled tickets for a return flight from San Francisco for him and his son Alexander.

We checked with some other airlines to see if the policies were the same.

After our inquiry, Resnick was contacted by United. It further explained its policy.

“Due to the Expedia record containing both passengers in one single name field, when you did not check in for this flight on November 30, the United system automatically designated the record as a ‘NO-SHOW’ and subsequently canceled both reservations,” a representative told Resnick in an email.

The rep further explained that the system would not divide the reservation because Alexander checked in at a kiosk.

“However, if Alexander checked-in with a Ticket Agent, the Agent should have divided the record, thereby allowing Alexander to return as scheduled,” the rep said.

The rep further offered some credits and refunds, but the offer in the email wasn’t clear.

Resnick called the rep for clarification.

United offered a credit for the full cost of Gerry Resnick’s round trip ticket and a refund for the extra flight home Alexander Resnick had to book when his return was cancelled.

It also offered the pay the difference between Gerry Resnick’s original flight and the more expensive return flight he had to book.

And finally, United is giving each flyer an electronic travel certificate that can be used for future travel.

In return, Resnick is dropping the lawsuit.

He said he was never looking for a windfall.

“My intention was always to impress upon United the unfairness of our treatment and the inequity of their policy,” Resnick said. “The practice of United and other airlines in cancelling out an entire reservation because the passenger is unable to make one leg of trip not only can result in havoc, as occurred in our case, but it also permits the carrier to have the advantage of payment of the round trip fare, and then being able to sell the seat a second time.”

Resnick said he’d like to see airlines change their policies to avoid this kind of confusion.

“The better option is for the airline to send an alert to the ‘no show’ traveler that he or she is in danger of losing the return flight if they do not respond in a designated period of time,” he said.

United said it was “pleased to have this matter resolved.”