Arlene Mangino keeps a close eye on her checking account.

When a $382.61 check she wrote for a Bank of America bill wasn’t cashed, she tried to find out what happened.

Mangino, 70, had placed the check in a blue mailbox in Bloomfield. Perhaps delivery was slow because of the winter storms, she said she was told, so she continued to monitor her bank account online.

After two weeks, the check was cashed, but not by the intended recipient. 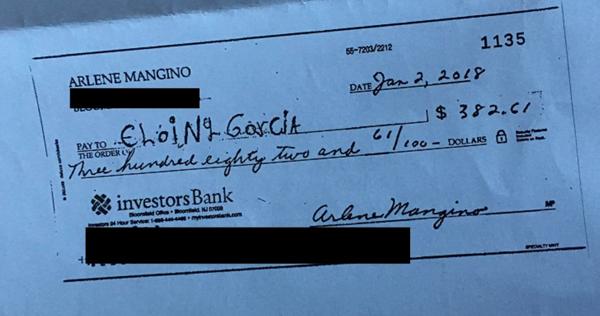 A copy of the Arlene Mangino’s check. She said someone whited out the recipient’s name and added a new one. A search of public records didn’t find anyone by the name written on the check.

“When I clicked for more info, a picture of the check showed Bank of America whited out and a phony name substituted, and it was cashed,” she said.

Something was very wrong.

Her bank account was frozen for her protection, and she filed a police report. The bank even gave her the money back.

Mangino spoke to a friend about the incident, and the friend said she could have been a victim of mailbox fishing.

“Crooks put sticky tape at end of string, then put it in blue mailboxes to retrieve checks,” Mangino said. “That is probably how they got my check.”

Her friend said it also happened to her in Bloomfield, and that the postal service and police were staking out mailboxes.

“We were alerted from the Postal Inspection Service that one of those devices was found in a mailbox in the north end of town,” DeMaio said.

Police had some boxes under surveillance, he said, but nothing was found and no one was arrested.

The bandit will take a string and attach it to a sticky object. It might be bottle covered in glue, mouse trap sticky paper or another item. Then they go fishing for your mail in the large blue mailboxes.

When the criminals have your check, they’ll try to cash it after changing the payee and even the dollar amount, for example, adding zeros to change a $20 check to one for $2,000.

It has received reports of mailbox fishing in Bergen, Union, Passaic, Middlesex and Essex counties, but it’s not naming specific municipalities to avoid jeopardizing any ongoing investigations.

Kliemisch said they’re working with local and state law enforcement on the issue, and it is also “implementing additional innovative methods” to safeguard mail.

“One of the many initiatives the U.S. Postal Inspection Service has spearheaded is the use of retro-fitted mailboxes with additional security devices installed at select locations to address the mailbox fishing issue in New Jersey,” he said.

The inspection service has also placed warning stickers on mailboxes to tell customers to avoid adding mail after the last posted pick-up time by the U.S. Postal Service. 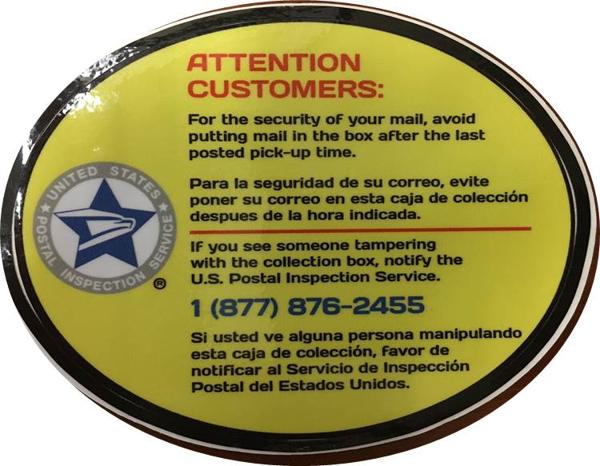 The decal placed by postal inspectors on blue mailboxes to warn of mailbox fishing.

The Postal Inspection Service asks customers to report any suspicious activity directly –not just to your local post office — by calling (877) 876-2455.

You can also make reports online. Select “contact us” and then “file a complaint.”

The Inspection Service also offers prevention tips, including checking pick-up times posted on blue mailboxes to ensure your mail won’t sit in the box overnight or over the weekend/holiday, and to collect mail from your own mailbox as soon as possible after it is delivered.

“If you have concerns about security in your neighborhood, place mail in a collection box in another area, in a secure receptacle at your place of business, or at a Post Office,” Kliemisch said.

And keep a close eye on your financial statements to make sure there’s no unusual activity.

“If you mailed a payment to a creditor and it has not been received, please review your account to ensure the check was not altered and payable to another party,” Kliemisch said.

Mangino says from now on, she will bring her mail into the post office rather than use the blue boxes, and she will pay her credit cards electronically.

Her checking account is still frozen, and once her Social Security direct deposits are moved to a new account, she plans to close the compromised one.

“It is good that people report this type of crime so the police can track the activity,” she said.