The notification posted at about 6 am. It was the message I was expecting.

Facebook said it gave away my personal data without my permission, thanks to one of my Facebook “friends.”

“Based on our investigation, you don’t appear to have logged into ‘This Is Your Digital Life’ with Facebook before we removed it from our platform in 2015. However, a friend of yours did log in,” the message said. “As a result, the following information was likely shared with ‘This Is Your Digital Life’: your public profile, Page likes, date of birth and current city.”

So I’m one of the 87 million people whose personal information was snatched by Cambridge Analytica, a political consulting firm that found a sneaky way to get data to help its clients profile and target voters in the 2016 election.

If you haven’t been following the news, a guy named Aleksandr Kogan created a personality quiz app — “This Is Your Digital Life” — and 270,000 Facebook users signed on. Kogan collected not only the users’ data, but also the data of their Facebook friends.

All without the friends’ permission.

Then, Kogan shared the data with Cambridge Analytica.

That was a violation of Facebook’s terms. The social media giant learned about the violation in 2015, but it didn’t tell its users. Instead, a whistleblower — Christopher Wylie, who was Cambridge Analytica’s director of research until 2014 — came forward and outed the scheme earlier this year.

That’s why Facebook founder Mark Zuckerberg will be spending some quality time on Capitol Hill, while Facebook users are left to figure out what to do.

This week, Facebook began rolling out the notifications through messages on users’ news feeds. If a user’s information was shared, they’d receive a message like the one I received. If their info wasn’t shared, the message tells users how they can manage their apps and their personal information.

It was time to go on a mission to see what info of mine was shared and what I could do about it.

By clicking the little arrow on the top menu, just to the right of the help button, I selected “Settings.” This takes you to the screen where you can access everything about your Facebook account.

I started with a review of my privacy settings. They were just as I had left them. You can check yours here. 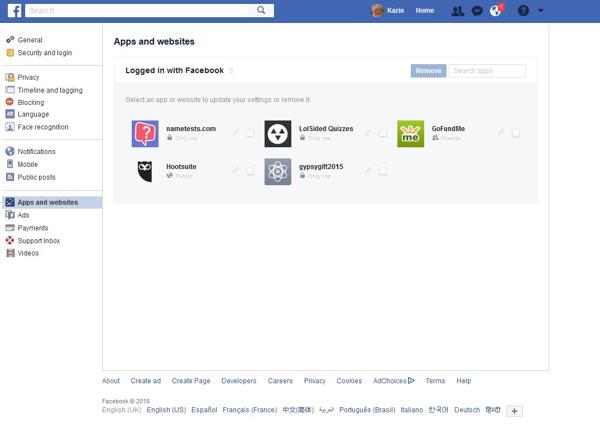 The screen showing to which apps I gave my personal information.

Now to the big villain in this Facebook story: Apps. I’m not a big fan of apps, or quizzes, or even cat videos, but I wanted to see if I had given anyone permission to view my Facebook profile data.

So next, I clicked on “Apps” on the left-hand menu. (You can click here.)

You’ll see a list of all the apps you’ve signed up for. Here, you can click on each app to see what kind of information you allowed the app to access.

I found I had five apps — not many compared to quiz-loving Facebook users. I only recognized two. The others showed I must have viewed a couple of quizzes in my day.

I decided to delete all the apps. 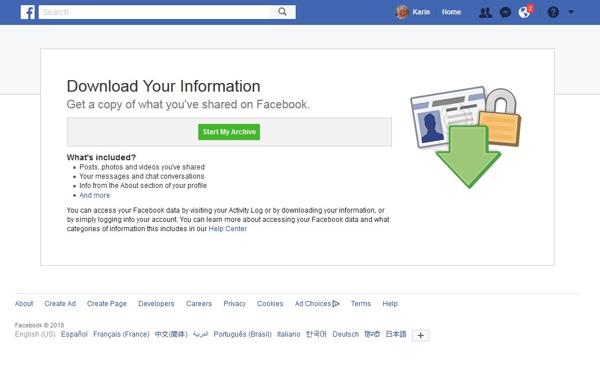 From the “Settings” screen, at the bottom, it will say “Download a copy of your Facebook data.”

After you click, Facebook will take you to a page with a little information on how to start what it calls your archive. You’ll then enter your password, and it starts to gather your data. Facebook sends an email when it’s ready for you to download.

My download had four folders: html, messages, photos and videos.

Inside each folder was pretty much everything I’ve ever done on Facebook. Old photos of my kids, my dogs, my vacations. Copies of old messages with everyone I’ve ever talked to using Facebook. You get the idea.

This might give you a clue about what kind of info is out there about you, or could be out there in the future — depending on what Facebook decides to allow.

While I like to think that I’m careful about what I click on, who I’m friends with and what I post online for the world to see (privacy settings aside), it’s a scary reminder of big data collection and what it could mean to your privacy.

I’m not bailing on Facebook yet, but I’ll be watching the hearings. And reviewing the rest of my Facebook settings.