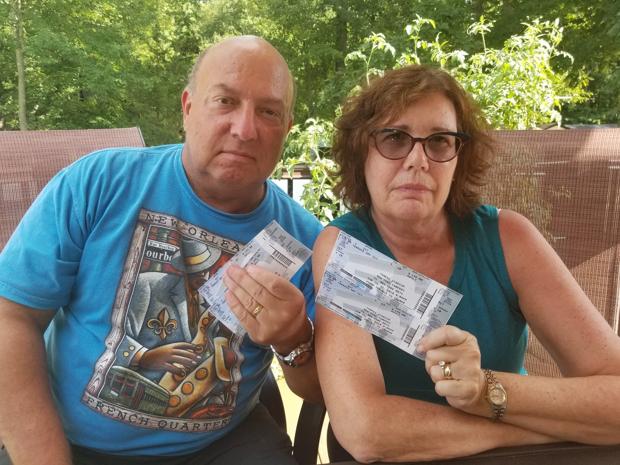 Marty and Beth Hammer hold their tickets to a Yankees-Mets game that was rained out. They tried to exchange the tickets without visiting the box office, but were foiled. (Dave Fischbach)

“Subway Series” games are especially fun for his family.

“My son and my wife are Mets fans,” said Hammer, 61. “My son’s wife and I are Yankees fans – a Subway Series game is the perfect venue for us.”

The family usually attends one game each season, so for this year, Hammer purchased four tickets at $145 a pop to the July 22 game at Yankee Stadium. The total price was $658.90 through Ticketmaster – where the Yankees’ box office directs fans to buy tickets – including $40 for parking, Hammer said.

But alas, the game was a rainout. 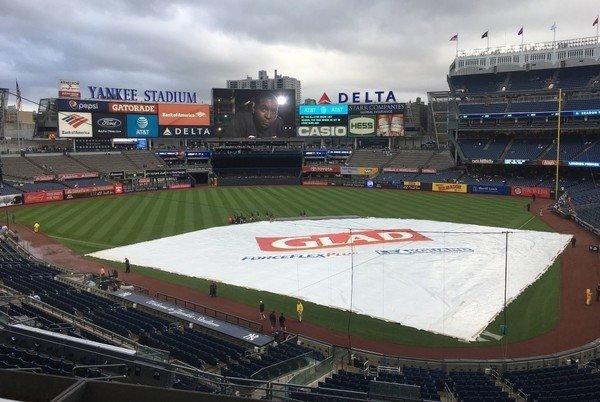 Rain postponed the Yankees-Mets game that the Hammers were supposed to see at Yankee Stadium. (Brendan Kuty | NJ Advance Media for NJ.com)

The game had been scheduled to start at 8 p.m. When the family arrived, there were tarps on the field and the rain came down so hard that fans couldn’t see across the stadium, Hammer said.

They waited in the bar until the game was called, and then they took the long drive home to Middlesex County.

The make-up game was set for Aug. 13, but because Hammer frequently travels for business, the family couldn’t make that date. 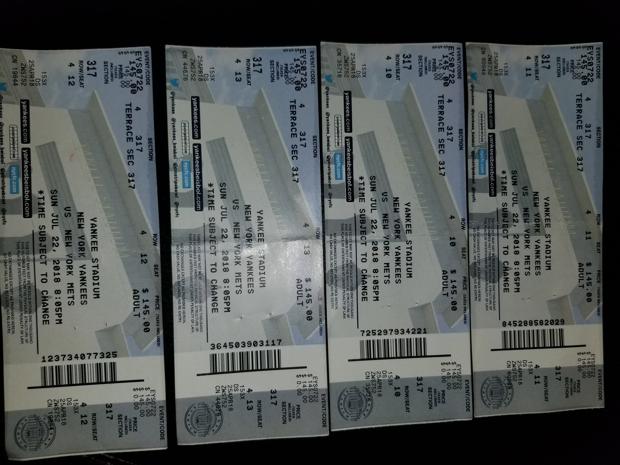 The four tickets the Hammers were trying to exchange without visiting the box office. (Marty Hammer)

“Here’s where the outrage begins,” he said.

“They tell me Yankees’ policy is that you have to exchange tickets in person at the box office at the stadium,” Hammer said.

He thought that couldn’t be right, and that there must be a way to make the exchange without taking what Hammer said could easily be a five-hour round trip to the Bronx.

“Even low-budget enterprises like the George Street Playhouse can take your unused ticket barcode numbers, verify they were in fact not used, invalidate them and then issue new tickets,” Hammer said. “But no. You need to go to the box office in the Bronx.”

Hammer said he tried to get through to the box office many ways, such as by calling the main Yankees’ switchboard. But when he was asked why he was calling, he said, he was told the same thing:  “The box office will not exchange these tickets unless you come in person.”

A redacted copy of an email sent by Marty Hammer to the Yankees organization. (Marty Hammer)

Emails to the organization didn’t help either. Hammer said no one responded.

“I am faced with spending what would easily be five hours of my life traveling to/from the stadium from Central New Jersey solely for the purpose of exchanging these tickets,” Hammer said. “Especially now with what’s going on at the Lincoln Tunnel, a `day trip’ just to get tickets exchanged is, well, let’s just say I’d rather get a root canal.”

“I would rather burn those tickets and never, ever return to Yankee Stadium rather than waste those five hours,” he said.

Out of options, he asked Bamboozled for help.

Bamboozled reached out to the team.

We wanted to know more about the Yankees’ ticket exchange policy and whether the team could help this fan.

It took only one business day to get an answer.

Hammer got a call from the Yankees, and the rep was able to exchange the tickets for the Sept. 1 match-up against the Detroit Tigers.

“Since that game’s pricing is lower, I was able to get better seats for less money – and a coupon for $40 to be used towards additional tickets in the future,” Hammer said, noting the tickets were to be FedExed to him at no additional charge.

More on options for fans

Hammer said he asked the rep how someone in his situation – living far from the stadium – is supposed to reach out for assistance when all Hammer’s previous attempts at making an exchange failed.

“Got no answer from him on that,” Hammer said.

We went back to the Yankees to learn more about options for ticket holders.

Yankees spokesman Jason Zillo said the organization’s website has directed fans looking for an exchange to visit the box office for more than 20 years.

But what about people – like Hammer – who have to travel a long distance?

“The simplest thing to do is when they end up choosing the game they would like, to check online to make sure there is availability and simply come to the game and exchange their tickets,” Zillo said. “That’s probably the most effective and easiest way to handle that.”

Zillo said with millions of people coming to games – and a very rainy season – exchanges haven’t been a large problem for most fans.

We wondered what would happen if tickets are not available.

“There’s got to be a baseline of knowledge,” he said. “Someone who bought a ticket to a Tampa game, if they want to show up with their ticket for a Boston game, that’s not going to work out for them. They have to make sure a game isn’t sold out.”

Zillo said some people choose to mail back their tickets instead, but that’s something the team doesn’t encourage.

“A lot of people don’t want to spend the money for FedEx, and basically you’ve got what amounts to money being mailed in hopes that it makes it to the recipient,” he said.

The other option is to try to call – something that didn’t work for Hammer. Zillo said fans can call the team at (718) 293-6000 and select the first option, No. 1, but he still encourages fans to show up on game day – after making sure tickets are still available.

The Hammers hold their new game tickets, which arrived via FedEx. (Marty Hammer)

Hammer received the new tickets via FedEx as promised, and the Yankees won the game 2-1.

“While I’m delighted in my personal outcome, I think their policy and set up is still far from customer-oriented.”

He also laughed because the $40 in “Bomber Bucks” he received “are only redeemable at the box office.”

“Gotta love them Yanks,” he said.