Earlier this year, A.J. Perri was hit with the largest fine ever levied by New Jersey’s plumbing board.

The state said A.J. Perri violated consumer rules and it spelled out how the company should change the way it deals with customers, including ceasing to pressure consumers with heavy-handed sales tactics, according to a consent order signed by the company and authorities.

But after the order was signed in January, the Division of Consumer Affairs said it continued to receive new complaints.

The state’s inquiry began after a string of complaints from customers who alleged A.J. Perri was overly aggressive in upselling services and equipment.

The state said the company “repeatedly engaged in use of deception and misrepresentation” and that it “used overly-aggressive and deceitful tactics to coerce consumers, many of them senior citizens,into paying for plumbing repairs and services that were unnecessary or far exceeded what was needed.” 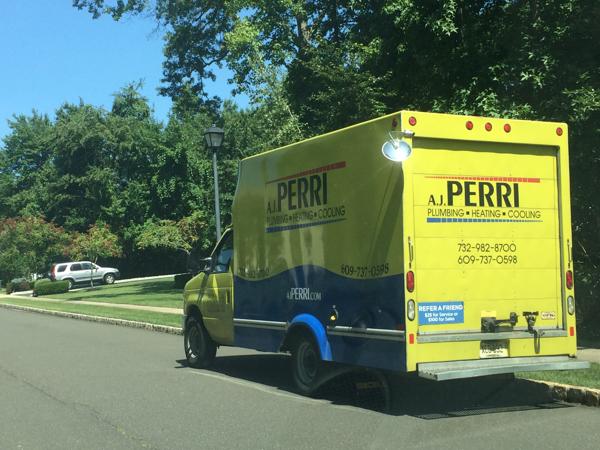 An A.J. Perri truck parked in a Monmouth County neighborhood in August.

Since January, the state has continued to receive new reports alleging similar behavior, leading to two separate reviews by the Board of Examiners of Master Plumbers and the Office of Consumer Protection, both part of the Division of Consumer Affairs, the state said.

The plumbing board typically addresses quality-of-work issues, while the consumer protection office focuses on allegations that fall under the Consumer Fraud Act.

So far, the plumbing board said, it has closed 15 of the complaints, but it wouldn’t say if they were closed in favor of the company or the consumer. Fourteen others remain open and are still being reviewed by the board, the state said, while the Office of Consumer Protection is just starting to review all 29 complaints, the state said.

“The large number of complaints raises questions about A.J. Perri’s business practices,” said Paul Rodriguez, the agency’s acting director, of the referral of complaints to the Office of Consumer Protection.

“That consent order not only held A.J. Perri accountable for its past misconduct, but it also required the company to make substantive changes to its business practices to ensure that going forward, senior citizens and other consumers are not targeted by overly-aggressive and deceitful tactics designed to coerce them into paying for plumbing repairs and services that are unnecessary or far exceed what is necessary,” Rodriguez said.

A.J. Perri said it was unaware of the state’s concerns because the company has been in regular contact with the state and has established a good working relationship with it. The state has only given positive feedback since the decree was signed, A.J. Perri said.

“We have not received any indication of concern or dissatisfaction from the state – in fact we have confirmed with the state that A.J. Perri has complied fully with the consent order and that no action is pending against the company – despite the statement that was provided to this reporter,” the company said in a statement. “To the contrary, the state has been complimentary of our compliance.”

In any case, Kevin Perri, A.J. Perri’s president, said the complaints represent a tiny fraction of the company’s business and that it has provided exceptional service to more than a million customers over its nearly 50-year history.

“I am deeply troubled by the Star-Ledger’s irresponsible decision to sensationalize situations in which customers were dissatisfied with our service, or simply chose to do business with a different provider, and use them to paint an incomplete, inaccurate and misleading picture of our business as a whole,” Perri said.

He said if a customer is dissatisfied, the company wants to know so it can make it right “consistent with our industry leading guarantees.”

In a meeting with Bamboozled at A.J. Perri’s Tinton Falls headquarters, general manager Jim Henkel said the company would not address specific complaints because it didn’t want to “disparage a customer.” 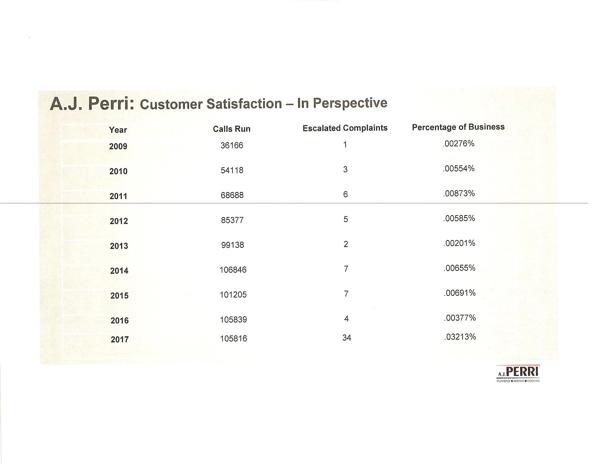 A.J. Perri provided Bamboozled with this breakdown of consumer complaints. It said its computer system only goes back to 2009.

Previously, the company said, customers most often went directly to the company to give it an opportunity to address concerns rather than complain directly to authorities.

Also, during the meeting, the company said it has procedures to ensure customers know what they’re buying when they hire A.J. Perri, including an additional verification process for customers who spend more than $1,000 to “make sure that customer is comfortable.”

Here are two of the complaints filed this year.

A technician said his unit needed new parts, Linzey detailed in a complaint to Consumer Affairs. It would cost $683.93 after a senior citizen discount, documents show.

Linzey’s complaint is among those that remain open with the plumbing board.

Linzey said he thought the repair estimate was expensive, but he agreed because it was too late in the day to call another company, he said in the complaint.

Then on Feb. 27, 18 days after the repair, the heating system died again, he said.

The tech jiggled a part and the unit started up, he said.

Linzey said the tech noted the age of the unit and decided to do some tests.

“He sticks in a little scope, looking around. He said there were cracks and the unit is dangerous,” Linzey said. The tech also said the chimney was blocked, causing a backdraft, he said.

The tech shut down the unit and offered to set up an appointment with a salesperson, saying the money paid for the first repair could be used toward the new unit, Linzey said.

Linzey said he was concerned about safety and still had no heat, but he wasn’t ready to meet a salesperson. Instead, he got a recommendation from a friend, and two days later, another company inspected the unit.

The new technician said the unit was old, but it should work, Linzey said.

The tech pressed the restart button.

“The thing starts right up,” Linzey said. “This guy brings out a gadget, a carbon dioxide checker, and said if I had the slightest crack in the unit it would go off.”

The technician also said the chimney was dirty, but there were no blockages, Linzey said.

The unit has been fine ever since, Linzey said.

He did receive the promised refund for the first unsuccessful repair, and he filed a complaint with Consumer Affairs in early April.

Bamboozled obtained a copy of Perri’s response to the plumbing board about Linzey’s complaint.

The company said in its second visit to the home, it found Linzey’s firebox was broken, pieces of metal were at the bottom of the furnace and it recommended the unit be shut down.

Linzey declined the recommendation, Perri said, noting it stands by its diagnosis.

Martel said a worker came to her Monmouth County home and told her she needed a new unit. The tech sent “an aggressive sales guy” later that day, she said.

Martel said the salesman recommended a new furnace and a new air conditioner, which Martel imagined could be accurate because the systems were 25 years old.

But that wasn’t the only reason to replace the equipment, she said she was told.

“[He] told us we were likely going to have a hole blow through our unit because it is so rusted and there was mold and we could have a fire in our attic,” Martel said.

When Martel expressed indecision, the salesman said he wouldn’t be able to find parts to fix the current unit, she said.

Then the sales pitch accelerated.

Martel decided to call another company for a second opinion.

Martel filed a complaint with Consumer Affairs on Jan. 15, and its among those that remain open with the plumbing board, the agency said.

Perri responded in writing to the plumbing board, saying it offered Martel three different options, including the option to do nothing. It did not address Martel’s allegation the salesman used pressure tactics, and it said the family called a Perri competitor and received a lower estimate for a furnace replacement.

Martel disputes that, saying she never got an estimate for a new unit, but instead, the contractor she called for a second opinion said a new unit wasn’t needed. It was fixed instead.

HOW TO FILE A COMPLAINT

Consumer Affairs said it encourages any consumer to contact the state “if they feel they have been harmed by a business or a licensee, or if they have information that a business or licensee is operating in violation of a settlement agreement.”