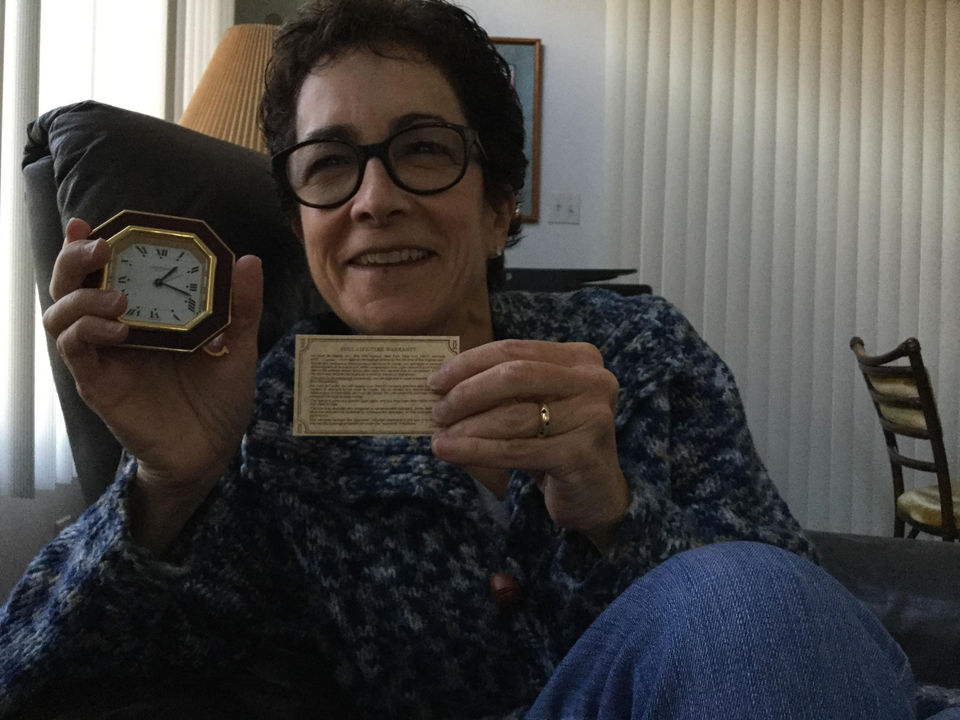 To consumers, the promise of a lifetime warranty is pretty clear.

If something breaks, the company making the promise will fix or replace the product.

Of course, there’s often fine print that makes a warranty less valuable. Other times, what the warranty promises isn’t clear.

That doesn’t seem to be the case for the lifetime warranty on a Cartier clock that’s been in Betsy Topilow’s family for decades.

In the case of this warranty, Cartier simply wasn’t honoring its promise.

The history of the clock

When Topilow’s mother moved to a senior care facility about two years ago – her dad passed away in 2002 – Topilow was tasked with cleaning out her parents’ home.

She came across a Cartier clock that she remembered from her youth.

“The clock had stopped working but was kept as it meant so much to them,” Topilow said, noting it was a gift. “I took the clock home with me and left it on my dresser.”

Time passed, and in September, Topilow decided to see if she could get the clock fixed.

She had the original box and paperwork, which claimed a lifetime warranty. 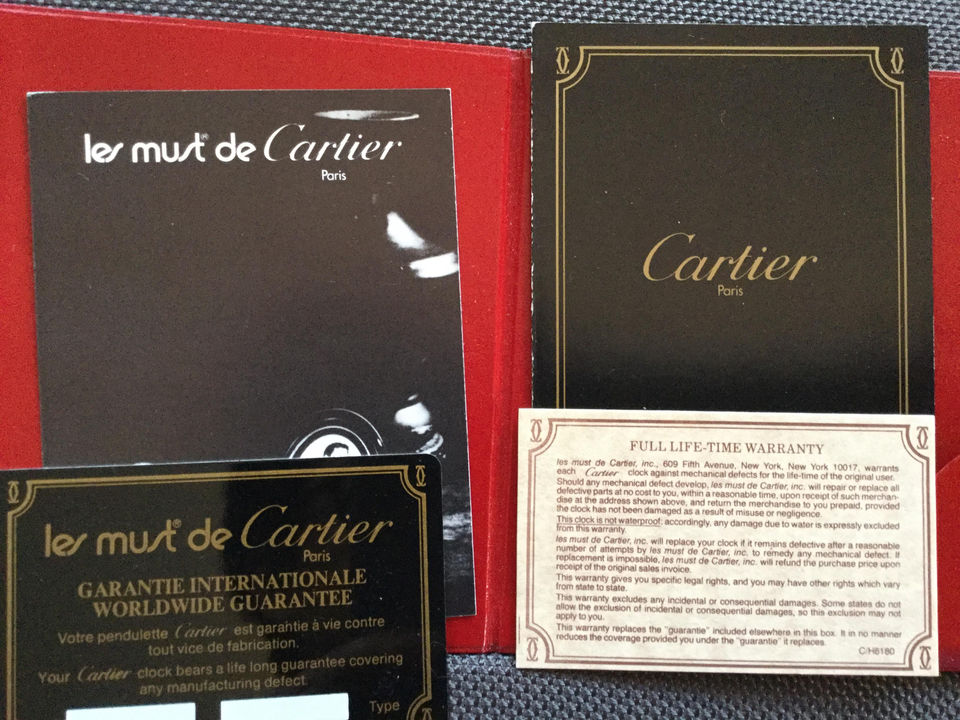 Topilow said she took the clock and its box to the Cartier store at The Mall at Short Hills,  where an employee agreed to send it out for repairs.

A few weeks later, the store called with the news.

“The clock could not be repaired as they don’t have the parts anymore,” Topilow said she was told. “The clerk offered me 20 percent off an item in the store that day only as consolation.”

She didn’t want a discount. She only wanted the clock to be repaired.

Disappointed but not ready to give up, Topilow took the clock to a local jewelry store for a second opinion.

“They sent it to their watch repair person, who looked at the clock and said they could fix it but it would cost $500,” she said. “Needless to say, I didn’t get the clock repaired.”

Instead, she contacted Cartier again, this time by email. She explained that she found a shop that could make the fix. Because the clock had a lifetime warranty, Topilow asked if Cartier would foot the bill.

She received an answer on Sept. 28.

“If you wish to have your clock repaired through a third party, kindly note we are unable to guarantee/warranty their work. In doing so, any cost associated with this repair would not be covered by Cartier,” the email said.

That didn’t seem right to Topilow.

“I told them how insulting that response was as the clock doesn’t work anyway, so their warranty, which they don’t even honor, doesn’t even matter,” she said.

In an Oct. 1 email back to Cartier, she requested her case be reviewed by a supervisor.

“I do find it hard to believe you don’t stand behind your craftsmanship,” she wrote. “I have found a solution for the repair and feel Cartier should stand behind its lifetime repair policy.”

Other offers, no fix

Shortly thereafter, Topilow received a phone call from the company. The rep explained again that the company wouldn’t pay for the repair, Topilow said.

“Then she offered me a free – $700 value according to her – leather Cartier watch band for one of my watches,” she said.

Topilow said thanks but no thanks. At the very least, she suggested, Cartier could split the repair cost with her.

“She then offered to give me a gift certificate to a restaurant,” she said. “I told her rather than those options, why couldn’t she take that cash and apply it to the clock repair? She wouldn’t budge.”

After that, Topilow shared her story with Bamboozled. 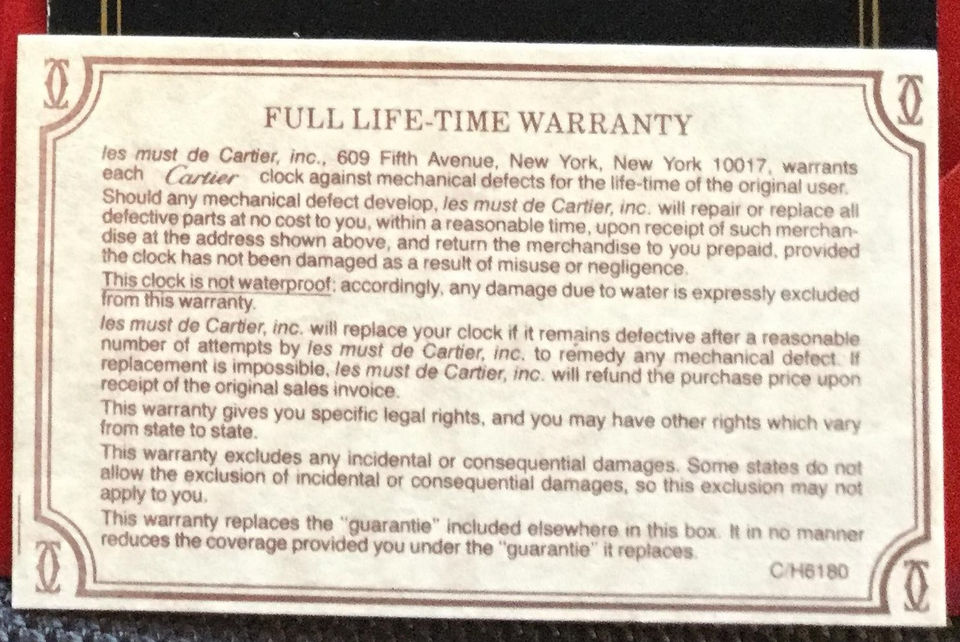 We reviewed Topilow’s timeline of events and took a close look at the lifetime warranty.

Its promise was pretty clear.

It said Cartier would repair or replace all defective parts at no cost to the customer.

It also said Cartier “… will replace your clock if it remains defective after a reasonable number of attempts…” And if replacement is impossible, it said, it would refund the purchase price as long as the customer still had the original receipt.

Nowhere does it say the warranty would be void if someone other than Cartier fixes the clock, nor does it address what would happen if the needed parts were unavailable.

So, really, if Cartier is unable to fix the clock and someone else can, it seems perfectly reasonable for the customer to request Cartier pay the repair costs.

And if such action does void the warranty, well, the clock is already broken, so what good is the warranty anyway?

We reached out to Cartier with Topilow’s experience, and we asked it to reconsider.

Traditionally, reporters will contact the public relations or media relations department of a company when seeking comment from a company.

When no one responded to our message to the general press email address, we called the Cartier corporate office.

After identifying as a reporter, the gentleman who answered the phone said “security reasons” prevented him from transferring the call to a Cartier media representative.

Really? The media can’t be transferred to a media rep for the company?

After further discussion, he said he could transfer the call if it was for a specific company employee. He suggested trying LinkedIn to get some names.

So over the next 30 minutes, we identified and were transferred to six employees, leaving voicemails for each. 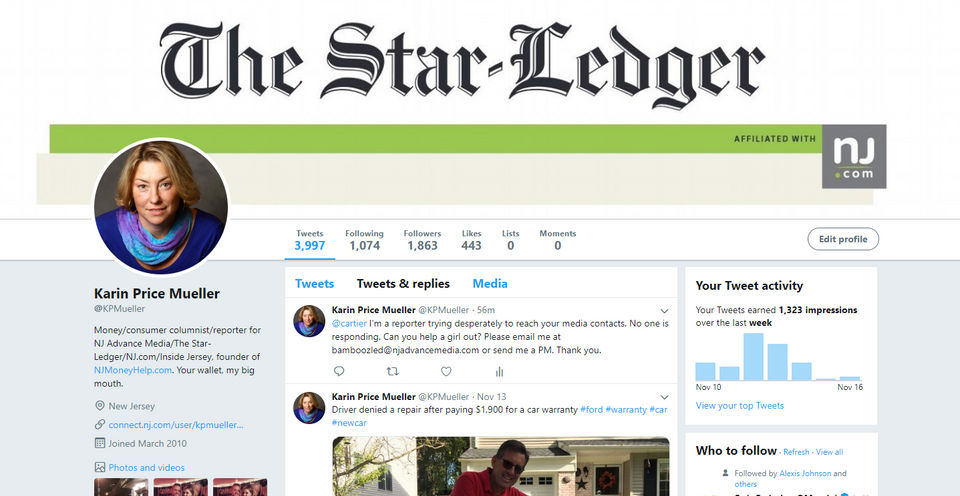 Next, we tried the social media route.

We sent a Tweet to Cartier, but no one responded.

Then we tried Facebook, and within 15 minutes, we received a response.

“Please kindly note, I am reaching out to the appropriate department for you. I will pass your information along accordingly,” the Cartier rep said.

That was promising, so we waited.

We tried yet another strategy: the parent company.

We sent an email to several representatives of Richemont, which owns Cartier and other luxury brands including including Montblanc, Alfred Dunhill and Vacheron Constantin.

So we went back to Cartier’s corporate number to try another name we found on LinkedIn.

We next left a message for Mercedes Abramo, the company’s North American president and CEO, hoping the executive offices would take interest in a consumer complaint.

We sensed a trend, and as consumer advocates, we didn’t like it at all. 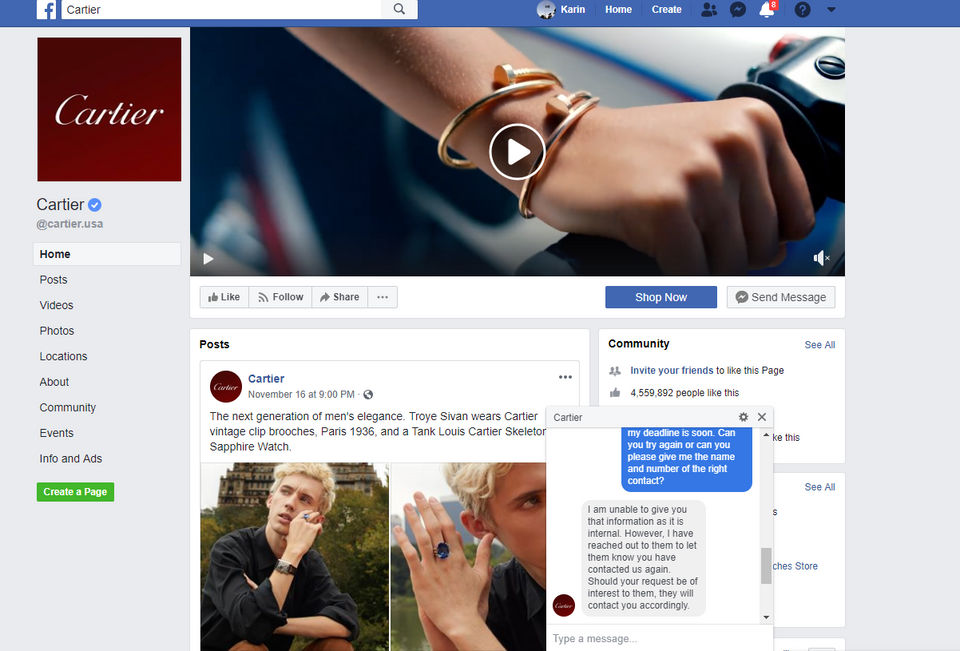 So one more time, we tried the company’s Facebook page, hoping the kind soul who answered the last message would respond again.

“I have reached out to them to let them know you have contacted us again,” the person said, noting they were not permitted to give the contact information for the correct person. “Should your request be of interest to them, they will contact you accordingly.”

We let a few more days pass, just in case someone at Cartier decided they cared.

Then we had a holiday miracle of sorts.

Cartier’s parent company emailed to say it passed along the message to the right person, and then we got a call.

It ain’t over till it’s over

But alas, that call turned into phone tag.

Finally, we were able to share the details of Topilow’s experience with Cartier spokeswoman Shannon Burton.

She said she would get someone on it.

WIthin the week, Topilow heard from a customer service rep who offered to send the clock to the company for another review.

That happened shortly after Thanksgiving, and on Dec, 18, Topilow received an answer.

Not the answer we’d hoped for

The rep said Cartier tried everything, but it was unable to fix the clock.

“I reminded her that another clock repair person said they could and [the Cartier rep] said she felt that it probably wouldn’t work long and it wouldn’t be under their warranty anymore,” she said. “Same conversation we had before.”

“I’m very disappointed. One would expect more from such a pillar of industry. I really thought they were a company that stood behind their reputation,” Topilow said. “After all, what else does anyone really have but their reputation?”

Topilow said she doesn’t have the time to take Cartier to small claims court. She also doesn’t want to pay for the outside company to repair the clock because it would void the Cartier warranty, Topilow said, noting the irony.

“As much as I would want the clock to be working I don’t think I’m prepared to pay $500 for the repair,” Topilow said. “I will probably keep the clock as it has a lot of sentimental value for me, even if it now leaves a bad taste in my mouth.” 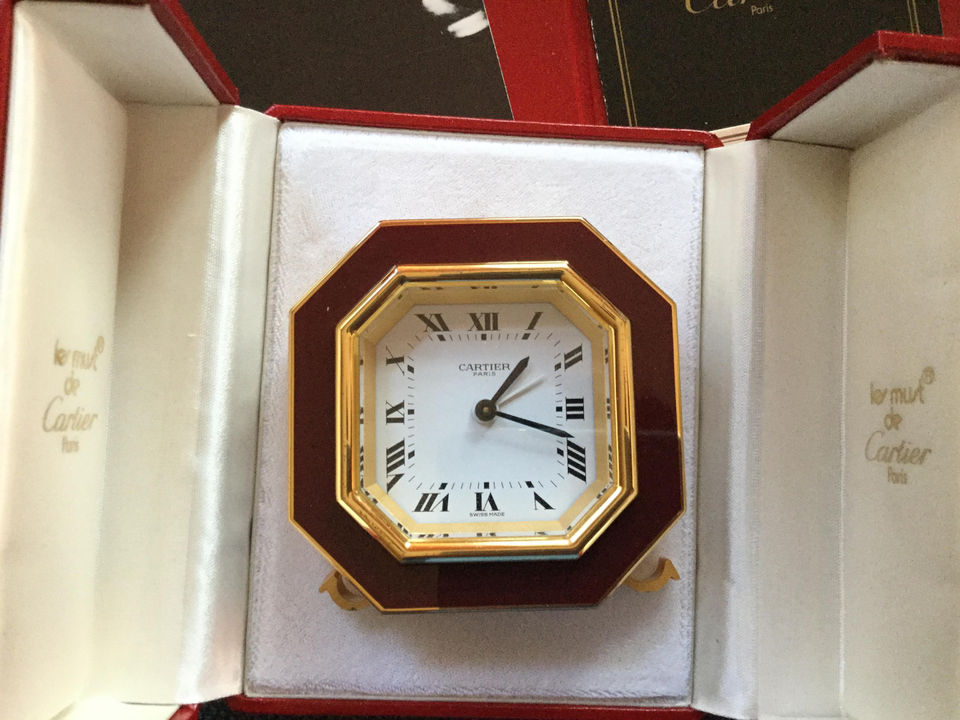 But then a new offer was on the table.

Topilow said when the rep asked if there was anything else the company could do, Topilow inquired about the replacement clock offered as part of the warranty.

“She didn’t think that’s what I wanted to do as it was a family heirloom and I explained that of course that wasn’t my first choice, but if I could look at something knowing where it originated, that would be a nice solution,” Topilow said.

The rep said she was going to be out over the holidays, but she would ask someone else to look into it.

On Dec. 28 – more than three months after Topilow’s efforts began – she received another email from Cartier.

The rep said she was trying to bring in similar clocks to the Short Hills store, hoping Topilow would select one as a replacement for the broken family heirloom.

“I explained to her I would take a new one as it would still be a keepsake memory,” she said. “Not sure if they would let me keep the old one, I tend to doubt that. That would make me sad, but I would understand if they wouldn’t.”

Finally, some word came in a Jan. 17 email to Topilow from the Cartier rep.

“I didn’t want you to think we forgot about you, as soon as I hear from international I will contact you immediately,” the rep said.

So Topilow is still waiting,

“I gave them the benefit of the doubt, but it’s way too long by now,” she said.

So much for that lifetime warranty.