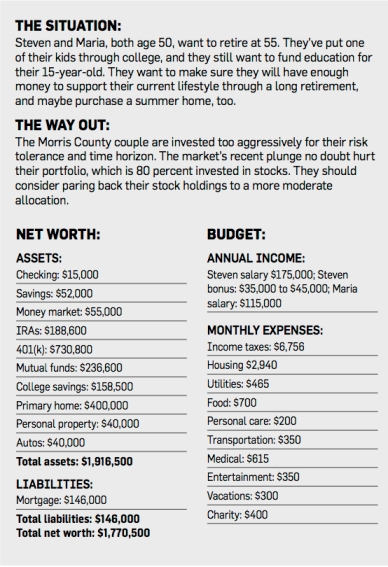 Steven and Maria, both age 50, would like to retire in five years — if they can do so without worrying about financial security. But they still have one more college education to pay for, and their child will be in college at the same time they’d like to retire.

Still, the couple is hopeful.

“We want to purchase a summer home with about 10 or 20 acres of land,” Steven says. “And we want enough money to retire earlier while maintaining our current lifestyle.”

The Star-Ledger asked Jerry Lynch, a certified financial planner with JFL Consulting in Fairfield, to see if Steven and Maria will be ready for an early retirement.

“Both have stable jobs with good income and they are saving about $60,000 annually, plus they are getting company matches of about $16,000,” Lynch says. “Generally if someone is saving 25 percent of income, they will be financially successful.”

This couple lives well below their means, which Lynch says is extremely important to growing your money.

“Being financially successful is not a function of how much you make, but rather living below your means on a regular basis, and investing on a systematic basis,” he says.

Lynch took a look at their investments, and he says they have far too many accounts, with several old 401(k) plans still with their old companies. Investors don’t get more diversification by having more investment accounts, he said. Instead, he says Steven and Maria should have one IRA and a Roth each, and possibly an individual or joint account.

“Having a lot of old 401(k) plans and IRAs just makes it harder to manage,” he says, suggesting they roll over and consolidate some accounts.

The couple also needs to take another look at their risk tolerance and their investment choices. They describe themselves as moderate investors, but they have 80 percent of their assets in stocks, and almost a third of that is in international stocks. That would make them aggressive.

“My concern about pure retirement at 55 means that we have to plan for 30 years for life expectancy and probably for 40 or more years, because people are living longer,” Lynch says. “A lot can go wrong in 40 years — like the August meltdown — that can seriously impact a retirement plan, no matter how good that plan is.”

He says being more aggressive generally helps you a lot more when you have a long time until retirement.

“My point here is simple. There is not much upside and if we have a market correction, there is a tremendous downside,” he says.

For college planning, Lynch said the couple did something very smart. When they were saving for their 24-year-old child, they used 529 plans instead of a UGMA account.

“Their oldest daughter is finished college and there is still over $60,000 left in the account,” he says. “If it was a UGMA account, it would belong to the daughter. Since it is a 529 plan, they can just change the beneficiary — not a taxable event — and this can now be used for their younger daughter’s college.”

Lynch says the tax benefits of a 529 plan — they’re tax-deferred and have tax-free withdrawals if used for education expenses — are much better than the a UGMA accounts and you have more control over your money.

Steven and Maria had their estate-planning documents drawn up a few years ago, but they skipped the very important step of retitling some assets.

“For example, not counting life insurance and their home, their total net worth is about $1.5 million,” Lynch says. “Out of that $1.5 million, only $80,000 would have the ability to go through a will — their cars and personal belongings. The rest would go based upon the titling or beneficiary designation of the assets.”

Life insurance, IRAs and 401(k) plans are distributed based on beneficiary designations. Joint owner property, if you die, will go to your spouse.

“To spend all your time and money on a good estate plan and not address the titling or beneficiary designations means that you spent a lot of money for nothing,” he says.