Ryan and Kaylie, both 40, are juggling a lot of bills and a lot of kids. They want to save for retirement and reduce their mortgage debt, but they’re also eyeing college for their four children, ages 9, 8, 5 and 3.

‘‘We’d like to pay for half to three-quarters of the children’s college education,’’ Ryan says. ‘‘We know we won’t be able to afford all the costs and will expect the children to help out.’’

The Star-Ledger tapped Mary Ellen Nicola, a certified financial planner with RegentAtlantic Capital in Chat- ham, to help the couple assess their retirement and debt goals, and to set a plan for college savings.

‘‘Their first priority should be to consult with an estate planning attorney and have their wills prepared to name guardians for their minor children,’’ Nicola says. ‘‘In addition, they should both have durable powers of attorney and health care directives prepared at that time.’’

For retirement, Nicola made some assumptions: The couple will stop working at the end of 2023 at age 55, and they would need $50,400 of after-tax spending until age 90. She also assumed Ryan will continue to save $4,500 a year in today’s dollars to retirement accounts and Kaylie will set aside $4,272 in her pension plan.

Nicola ran the numbers to see if the couple would have enough to retire at age 55, and also how they would fare if they worked another one or two years to boost their retirement accounts. The calculations looked at how much of a different outcome they would have with 40 percent, 60 percent or 80 percent of their assets in equities. The results — they could do it, but they have a better chance of not running out of money if they delay retirement a few years, as long as they have between 60 percent and 80 percent of their portfolio in equities.

But if they wait two more years to retire, they would have a 96 percent chance of not running out of money, whether they invest 40 percent or 80 percent of their assets in equities, Nicola says.

To increase the chances of Ryan and Kaylie being able to afford retirement at age 55, they should seriously consider upping Ryan’s contributions to his 401(k) plan to the maximum, which is $15,500 for 2008.

Their primary mortgage and their home-equity line of credit are both 30-year loans, with the first 10 years as interest only. Their annual cost for the primary mortgage is about $33,000 a year and will increase to $42,000 in 2017. The HELOC payment also will jump in that year by a whopping $2,500 a month. While Ryan and Kaylie pay some extra principal on the loans, the mortgages could get very expensive over time and if they ever decide to sell their house, they’ll find they don’t have much equity.

Nicola says they should talk to mortgage brokers about converting the primary mortgage to a 30-year fixed- rate loan, and they should make an effort to start to pay down the HELOC.

For college, Ryan and Kaylie should open 529 plans for their kids, and that’s where their savings should go. To reach their goal of funding $15,000 a year for four years for each of their four children, they’d have to set aside more than $20,000 a year starting in 2008. That’s a big bill, but anything they can save in a 529 would help.

‘‘The investment will grow tax-deferred and upon distribution to pay for college, there is no federal tax,’’ Nicola says. 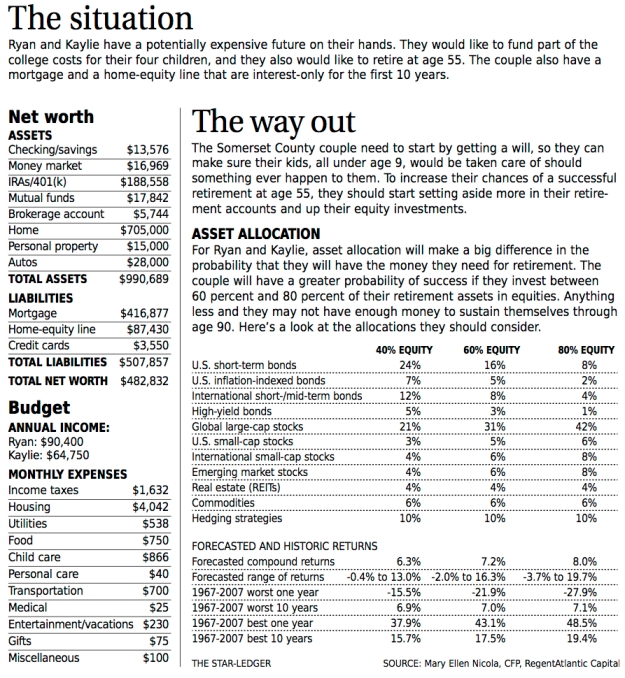