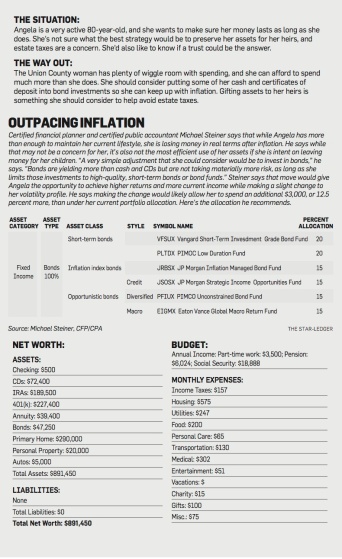 age 80, Angela has had a full life, but she’s nowhere near done yet. Still, she tries to be smart about her money, and she doesn’t want to leave anything to chance.

“I want to minimize taxes for my six heirs. I’ve heard that a trust could be advantageous. Could it?” the divorced woman asks. “And the big question: Will I outlive my money?”

The Star-Ledger asked Michael Steiner, a certified financial planner and certified public accountant with RegentAtlantic Capital in Morristown, to see how long Angela’s money will last

Steiner took a close look at Angela’s savings and spending habits, and he liked what he saw. Still, he wants to make sure Angela is being realistic and accurate about her spending.

“Angela is quite thrifty, reportedly spending an average of $2,000 a month or $24,000 per year,” he says. “Oftentimes I find that clients will underestimate their monthly costs as they generally tend to focus on recurring and fairly easily predictable costs and can overlook some not so regular costs.”

Plus, he says, it’s easy to forget about snow removal when it’s 85 degrees out, so he prefers to test a range of spending to allow for those forgotten items or occasional surprises. That allows him to get a better idea of someone’s financial well-being, and it helps people avoid typically strict budgets, which Steiner says can be an added stress in retirement.

In Angela’s case, Steiner tested her spending to see how high she can go before encountering any sort of financial stress.

He says her core spending is covered by a combination of Social Security benefits and a pension which total nearly $25,000, so she barely needs to take any risk with her investments as long as inflation, and her corresponding cost of living, don’t ramp up significantly.

Steiner describes Angela as an ultra-conservative investor, given that all her investments are in cash, certificates of deposit and fixed annuities.

“Clearly, volatility is not welcomed in Angela’s world,” he says, noting that she’s very risk-averse. “She told me she bought a bond fund once and it lost money — in the middle of 2013 when rates rose — but any asset allocation projection that would be designed to outpace inflation would require owning equities.”

The other option is to invest in more high-quality, short-term bonds or bond funds, which would increase her income enough to spend an additional $3,000, or 12.5 percent more, than under her current portfolio allocation.

“While a change in spending pattern would be unlikely for her, this could also enable her to leave more assets to her children,” he says, noting that this is a major goal for her.

And that ties in with taxes. While her income level means she is in a very low income tax bracket, that has nothing to do with what estate taxes may be due after she dies.

Steiner says while the current federal estate exemption amount is $5.34 million, New Jersey is stuck in the year 2000 with a $675,000 exemption.

“Thus, when you take into account the value of her home and investments, if Angela passed away yesterday, a portion of her estate — $200,000 — would be subject to New Jersey estate tax,” he says. “This would result in an estate tax somewhere in the neighborhood of $30,000.”

Steiner says if Angela is concerned about estate taxes taking a chunk out of her children’s inheritance, should could consider spending down her assets or gifting to get to the $675,000 asset level.

Steiner sees that spending more is probably not in Angela’s nature, but he says gifting may be a more palatable option for her.

He notes that her core expenses are covered by her pension and Social Security, so she does not need to tap into her portfolio for much.

“In fact, she can give away $200,000 today and still be able to maintain over $40,000 in annual spending,” Steiner says. “New Jersey does not impose a gift tax, and the federal exemption would more than cover her, so this is the easiest way to avoid the $30,000 estate tax bill.”

If Angela isn’t comfortable making such a significant gift today, she can always make annual exclusion gifts of $14,000 to each of her kids, and another $14,000 to grandchildren, in-laws, or anyone.

But Angela has some concerns about her adult children and how they manage their own personal finances, and she says she’s afraid the kids will spend it right away and not save it for their futures.

“She was intrigued by the idea of setting up a trust to receive these gifts to protect the assets and the level of restrictions she can exercise over the trust,” Steiner says. “I also suggested that she consider funding 529 plans for her grandchildren’s education as there are significant limitations — tax consequences — in how those funds can be spent and that piqued her interest.”

Steiner noted Angela may be deterred from setting up a trust or trusts because it would entail incurring legal fees and additional ongoing account fees, and those costs may be high relative to the amounts she would ultimately be gifting.

Get With the Plan is designed to illuminate personal finance concepts and isn’t a substitute for actual financial planning or dedicated professional advice. To participate, contact Karin Price Mueller at kmueller@starledger.com.