Dave, 41, and Daphne, 35, are shooting for an early retirement. But that’s not their only goal. They want their two children, ages 9 and 5, to get a helping hand with college bills.

‘‘We’d like retirement before age 60 and to put both children through college,’’ Dave says.

The couple also own outright a vacation home they rent to offset the costs of ownership.

The Star-Ledger asked Jody D’Agostini, a certified financial planner with AXA Advisors in Morristown, to help the couple see if their early retirement goal is realistic.

‘‘The couple should be well prepared to enjoy retirement,’’ D’Agos- tini says.

As a state worker, Dave is expect- ing a generous pension that will make a big difference in the couple’s financial future. He can expect 60 percent of his income upon retirement. He makes $104,000 per year, and with expected raises of 3 percent annually, he can expect to be making $162,029 at retirement in 15 years, providing him with an annual pension of $97,217.

‘‘This will take much of the pressure off of them in retirement,’’ D’Agostini says.

‘‘They should be very well-situated to retire at their respective ages, as long as they continue to save into their retirement plans and continue to keep their expenses in line,’’ she says.

But retirement’s not completely in the bag. They should consider what they envision their retirement to look like, as in the past, funding retirement required less income than pre- retirement. Today, though, people are living longer, healthier and are more active. Retirement can last more than 30 years as life expectancies for both genders have risen into the low 80s. That means they may need more income in retirement if they enjoy good health, travel often, pursue hobbies and even buy businesses or explore a second career on a part-time basis.

For college, Dave and Daphne are saving in 529 plans, which are granted tax-preferred status if used for college funding. They currently have a balance of $34,600 toward their goal of fully funding four years of public education for their two kids. Based on their risk tolerance, D’Agostini says they should save $400 a month if they would like to fully fund the eight years of college, based on a price of $19,270 — the cost of tuition and room and board at a major public state universities. Inflated at the projected college inflation of 6 percent a year, this will cost about $280,000 for both educations.

One item to note: D’Agostini says Dave and Daphne may be underinsured. Should something happen to Dave, they would want to at least replace part of his income to meet ongoing expenses, as well as fund college and pay for expenses at death. He has $280,000 of coverage, but D’Agostini suggests they consider an additional $380,000, 20-year term policy.

‘‘They need to consider disability insurance as well, in case Dave is unable to work for some extended period of time,’’ she says. ‘‘This is statistically a much more likely, yet more frequently ignored, risk.’’ 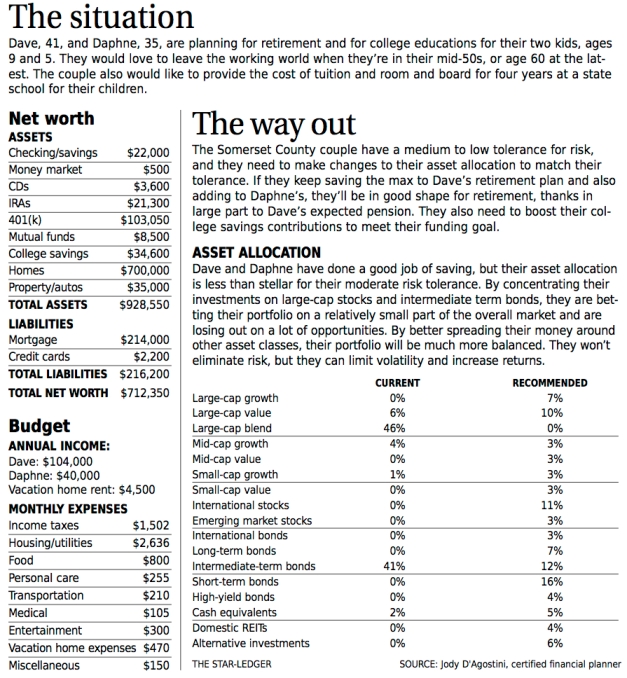