Richard, 44, and Nan, 43, have been diligent savers and careful spenders. They find themselves in the uncommon position of being debt free, so they can concentrate on saving for retirement and for a college education for their 14-year-old child. They’ve been do-it-yourselfers, and they want to make sure they’re doing all they can to set up their future.

‘‘We would like to retire at 60 and be able to travel two or three times a year,’’ Richard says. ‘‘We’d also like to pay for our son’s college.’’

‘‘They are savers. Very good savers,’’ Garutti says. ‘‘Not having a mortgage at their age is a bit out of the norm, but the problem with the current economy is the opposite of these people. They obviously have always lived within their means and should be strongly rewarded for their actions.’’

Garutti says Richard and Nan are do-it-yourselfers and they’ve done a lot right. Still, retirement at age 60 may be tough to count on, given that it’s many years away.

He says people in their young 40s may have a retirement picture, but forecasting actual costs for something so far away is not easy.

For that reason, Garutti’s first recommendation is to see if they can afford to save more. Based on their budget and expenses, Garutti says they can.

He recommends they first complete an investment risk tolerance assessment to make sure they’re buying the right kinds of investments. Richard in the past has always picked funds from personal research, and he admits he’d be open to learning more about how to truly evaluate and compare different investment options. Most of the couple’s investments are index and target funds.

The couple aren’t taking full advantage of their em- ployer retirement plans. Today, they each only contribute 6 percent of their income, so they’re missing out on contributing an additional $16,890 combined, pretax.

Garutti says after taxes, assuming a 28 percent tax bracket, it would only cost them $12,160.80 out-of-pocket to add that much more to their 401(k) plans annually — a move Garutti recommends.

Richard and Nan also have traditional IRAs, which Garutti says they may want to consider converting to Roth IRAs in 2010, when the income limits are temporarily lifted.

One big risk to the couple’s plan is that they both work for the same company. Not only do they rely on income from the same source, they also have a significant percentage of their savings wrapped up in their employer’s stock.

The couple’s child is a high school freshman, so college is looming. Richard and Nan hope to pay the entire tuition bill. Today, they don’t use any 529 plans or other tax- advantaged savings vehicles for college funds, and all their savings is in cash equivalents. They’ve been saving a massive $2,575 each month, which will allow them to come close to funding a Princeton-equivalent education.

Garutti says they could consider moving money into a 529 plan for the tax advantages, but he says they should only put a small portion in equity positions because they are so close to meeting their goals. While they will need to spend some of the money in a little more than three years, they will not be spending all of it for approximately seven years, he says.

‘‘It may seem difficult to imagine in the current economy, but there are some additional investment options that could make sense for them,’’ Garutti says. ‘‘They could consider adding some bonds and maybe dollar- cost-averaging a little bit into stocks.’’

The couple also is underinsured, because all of their life insurance is tied to their employer. If they lose their jobs, they’ll also lose their coverage. Garutti recommends they purchase term insurance policies replacing at least the amount of coverage they have through work, and those policies will stay with them no matter where they’re employed. 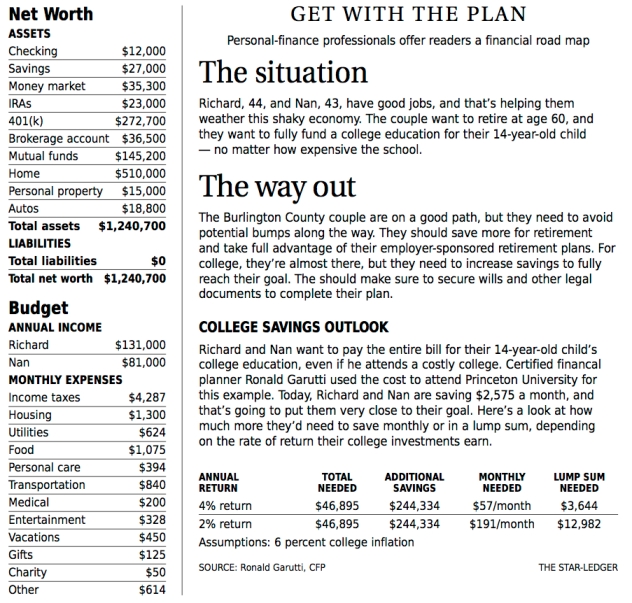