Robert, 52, and Ann, 51, are sure about their priorities. They’re sticking to their commitment to pay for their two kids’ college educations, and there’s only one year of tuition to go.

“The only debt each of them has is a small student loan from freshman year that we felt would help them establish credit when they started paying it back,” said Robert. “We want to start planning for ourselves.”

Robert and Ann, whose names have been changed, hoped Robert could start a semi-retirement in five years. With the stock market’s fall, they expect it may take longer to retire completely, so part-time work is part of their long-term plan.

“They’re approaching the sweet spot of their accumulation years,” Marchesi says. “The second of their two children has one year left of college, their mortgage is not suffocating their house value, and their combined earnings/savings power is significant.”

He says their plans to reduce their dependence on earned income before they are 60 are reasonable, but they understand that may be a challenge given the magnitude of the market’s recent retreat.

But first, they have some trimming to do before they are budget-fit for retirement, he says. There are also some assets that aren’t fully factored into their future retirement picture. For example, Robert’s stock option grants should continue at a healthy pace, and with a modest total return assumption, this growing asset will be meaningful as each stock grant vests. Plus, Robert’s family has a trust that will provide for his mother’s lifetime, and when she passes, any remaining assets will be distributed to Robert and his siblings.

“At some point in the future, their net worth statement could improve dramatically,” Marchesi says. “Yet, the couple needs to tend to business and continue to manage their financial picture.”

He says Robert and Ann need to develop a strategy for migrating some of their stock investments, which are long-term assets, into more near-term assets, so they’re better suited for distribution purposes.

They currently have more than 88 percent of their investments in stocks, which, in difficult markets, are not good assets for near-term distribution purposes. They may not need to sell their stocks for living expenses today, but there will be a point in the future where they will need to have a better system for creating liquidity and making funds available.

“If you try to liquidate long-term assets in a bad pricing environment — which is a euphemism for a lousy stock market — your money will not last as long as it should,” Marchesi says.

Robert and Ann need to define their investment selection process. They own the same stock in four of their accounts, representing a total of almost 10 percent of their long-term assets. If this stock works out well, it may provide a better than market return, Marchesi says. But if it does not work, they jeopardize a portion of their retirement assets.

Additionally, they have more than a quarter of their long-term assets in financial stocks. Over time, this could work to their benefit, but they need to understand the consequences associated with an underperformance this sector in regards to their retirement.

“All in all, the couple has time to develop a sound strategy and should be able to reap the benefits of a flexible, relaxed lifestyle,” he said. 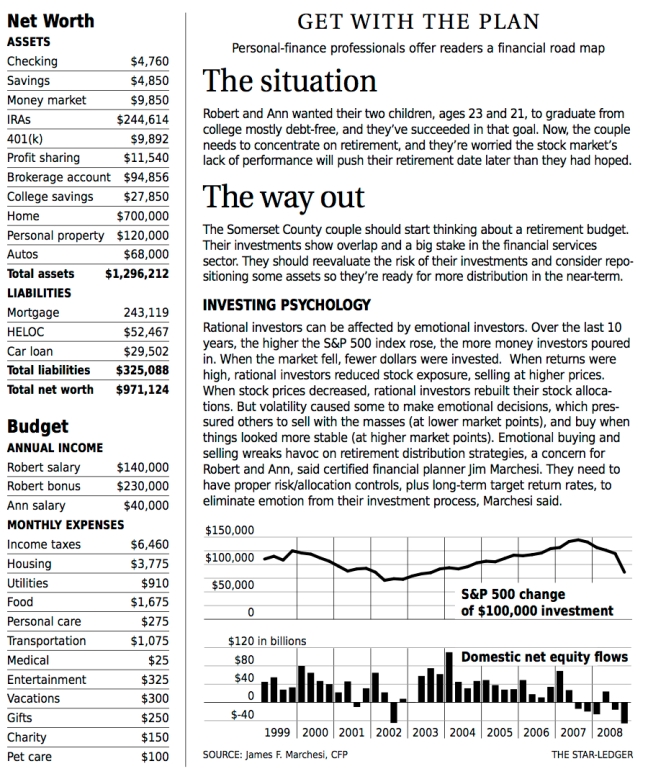