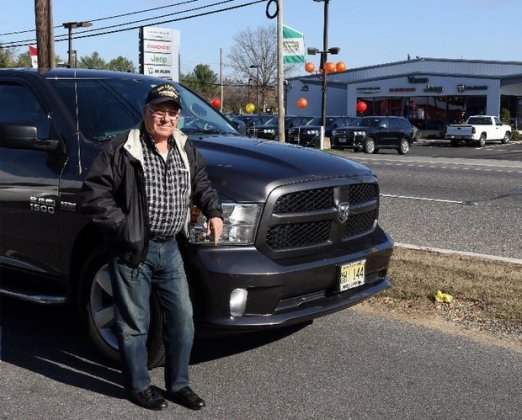 Since 1965, he said, he’s only purchased Chrysler, Dodge and Plymouth brands, and his last three vehicles were Dodge pick-ups.

He was happy with his purchase.

But in October, Huhn realized his alarm wasn’t working. Around the same time, he received information about a recall for airbags.

So he went to his dealer, Vann Dodge Chrysler Jeep Ram in Vineland, to set up an appointment to repair the airbags.

He said he explained that the alarm wasn’t working.

The rep said it takes five minutes for the alarm to arm, Huhn said.

“I went out and set the locks with the driver’s side window open, and waited five minutes, then opened the door from the inside. Nothing,” he said. “I asked him why there was no indicator light on the dash that showed the alarm was armed. He said they did away with the indicator light.”

Next, the rep came outside to give it a try. After 30 minutes, he gave up.

Huhn said the rep said they’d work on it when Huhn’s car returned to fix the recall, and that Huhn might want to call Chrysler to see if it had any suggestions.

When Huhn returned home, he called Chrysler, but it didn’t understand why the alarm wasn’t working, either.

So when Huhn came in for his appointment, dealership the mechanics worked on the truck for about two hours, including the recall issue, he said.

They activated the alarm, but there was a surprise.

“When I went to retrieve his keys and check out, he was told there was a $108.87 charge for activating the alarm,” Huhn said.

Huhn didn’t think that was right.

The alarm had never worked from the time he purchased the truck nine months before, he said.

More importantly, he said, no one ever told him there would be a charge to activate the alarm.

“I was told that I had to pay to get the alarm activated after they activated it,” Huhn said. “I argued all the way to the sales manager and all they said was they could return my money if I had them turn off the alarm.”

But Huhn insisted he was told the truck had an alarm when he made the purchase.

“At first the representative said I was still under warranty and shouldn’t have to pay, then he put me on hold and talked to someone there and came back and said they charge to activate the alarm,” Huhn said. “The dealer says they can’t do anything because it’s a Chrysler charge and Chrysler says it’s a dealer charge.”

GETTING TO THE BOTTOM OF THINGS

We reviewed Huhn’s paperwork, and we reached out to the dealership and parent company FCA Group.

While they reviewed Huhn’s case, we reached out to a few car experts.

“I’m scratching my head over why someone would be charged $100 for something that should have been turned on before he drove off the lot,” said Jim Treece, news editor for Automotive News.”

“The experts I have here have not heard of this type of activation fee and many have previously worked at dealerships,” spokeswoman Brenna Robinson said.

Edmunds.com said it hasn’t heard of this kind of charge, either.

“Our consumer advice experts have never heard of anything like this, nor have those at Edmunds Live Help,” a spokeswoman said, referring to the company’s free service where consumers can ask car-related questions.

Then we heard back from the dealership, which said it had a somewhat different accounting of events.

Huhn’s truck has a “Sentry Theft Deterrent system,” which means the truck will not move unless it sees the key fob inside the cabin of the vehicle, said Martha Snow, the dealership’s service and parts director.

And as Huhn reported, they looked up the VIN number and “nothing on that build sheet specified that the vehicle had a security alarm.” She said they double-checked with Chrysler to make sure they weren’t missing something, and corporate confirmed it didn’t have an alarm.

“At that time, [our rep] spoke to Mr Huhn and told him that if he would like to add this option to his vehicle, we could activate it, and it would be a $100 charge to do so,” Snow said. “Mr Huhn agreed to this prior to the alarm option being activated on his vehicle.”

She said the dealership never does repairs that are going to cost customers money without first obtaining an authorization from the customer.

She recommended he call corporate again and ask for reimbursement.

We wanted to understand whether the truck actually had the alarm system but it was not turned on, or if the dealership added something when Huhn brought the truck in.

“The truck is equipped for it, but it is not active unless a customer pays to have that particular option turned on,” Snow said.

“The service people never told me there would be a charge before they activated it, only after,” Huhn said. “Everyone in the service department that I talked to thought it had an alarm and couldn’t figure why it wouldn’t turn on.”

Then Huhn got a call from corporate.

“They will be sending me a check for $110,” Huhn said. “[The rep] told me she and three others in her office spent 35 minutes trying to figure out what happened, and she agreed with me the phrasing could be better and [they] will be rephrasing how they put it on the window sticker.”

We like the idea of better clarity in the future for customers to know if they have an alarm, a theft deterrent system, or both.

Then we heard back from the dealership, which also said the parent company would be sending a check to Huhn.

“They admitted the mistake was made on behalf of customer care, not the dealership,” Snow said.

FCA Group said it was taking responsibility for the misunderstanding, and it confirmed it was sending the check. It also said all its vehicles are equipped with alarm systems, but whether or not they’re activated is a function of the trim level chosen by the buyer. For some, it’s standard, but for others, it’s not.

We appreciate that FCA is making this right by the customer, but it wasn’t there when Huhn bought the car. Huhn still insists he was told at the time of sale that the truck had a traditional alarm system along with the theft deterrent system, while the dealership still denies that.

Whatever happened then, at least now, Huhn is now satisfied.

Still it seems silly to us that any new vehicle would be equipped with an alarm system but it wouldn’t be activated at the time of purchase. If it’s not activated, what the point in having the alarm?

Let’s hope this isn’t a new trend in new vehicles.

Have you been Bamboozled? Reach Karin Price Mueller at Bamboozled@NJAdvanceMedia.com. Follow her on Twitter @KPMueller. Find Bamboozled on Facebook. Mueller is also the founder of NJMoneyHelp.com. Stay informed and sign up for NJMoneyHelp.com’s weekly e-newsletter.