The past few years have been tough ones for Judy and Dennis Reilly.

Dennis, 61, was a letter carrier until he broke his back falling off a ladder while cleaning the gutters of his South Plainfield home two years ago. Judy, 57, has also had health problems, and they’re both on disability.

They struggle to make ends meet and stay current on their two mortgages, college loans for their children and credit cards.

In November, Dennis Reilly saw a commercial for something he thought could help: the “Transforming Debt Into Wealth” system.

“My husband called the number on the TV and ordered what he thought was a trial CD,” Judy Reilly said. “A short time later, a large box appeared at our front door.”

The box remained unopened for weeks because it arrived at about the same time Dennis Reilly ended up back in the hospital for an extended stay. With more important things to worry about, the couple didn’t pay any attention to the box.

“All of a sudden, a charge appeared on our debit card for $80 from this company,” Judy Reilly said.

Shortly after, there was a second $80 charge. 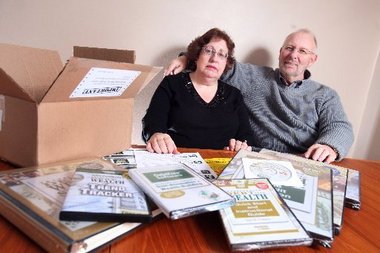 “I thought it was a mistake,” she said.

But it wasn’t a mistake.

After a series of phone calls, the Reillys learned they had signed up for more than a trial CD. It was the whole shebang: six CDs, a manual, an instructional DVD and a software program, all for $399.95. There was a 30-day free trial period, but that had run out, and there would be a total of five $80 monthly charges to their debit card, the customer service rep explained.

“I protested, saying that my husband only agreed to a trial CD and certainly would not agree to all this,” Judy Reilly said.

The representative said it was too late, Judy Reilly said, even though the materials in the box were unopened and unused.

Reilly said the rep wouldn’t transfer her to a supervisor or a manager, but she was given several other customer-service numbers. She called, but she said she got nowhere.

Not knowing what else to do, the couple contacted Bamboozled.

Bamboozled has seen commercials for this and other products offered by author and public speaker John Cummuta, whose online bio says he’s helped more than 2 million people “position themselves to enjoy retirements most will only dream about.”

How does the “Transforming Debt into Wealth” system work? The website states: “This comprehensive multi-media learning program teaches working people that the way to financial independence is not through “managing’ their debts, but through eliminating them … all of them, including their home mortgage, in as few as 5 to 7 years, no matter what their income level or their debt load.”

More on that later.

We left a few messages with the company, and we received a call back from Shanlly Efendi of Nightingale-Conant, the self-improvement program marketing company that sells John Cummuta’s stuff.

“We get quite a few of those. It’s difficult for us to believe all the stories,” Efendi said after we explained the Reillys’ problem.

After looking further, Efendi offered to close the account so there would be no further charges.

“But I won’t be able to give them a refund,” she said.

Efendi took another look at the account and offered to refund one of the two $80 charges.

“Excellent. Terrific,” Judy Reilly said when she heard the news. “I’ll package that back up and send it right out.”

The Reillys agree they should have looked more deeply into the “free trial” offer before signing on. It’s common that so-called free trials turn into paid memberships or other fees after the initial introductory offer expires. It’s tempting, though, to ignore the fine print when you see something that promises an answer to your problems.

There is no free lunch.

Does the “Transforming Debt into Wealth” system work?

For some consumers, we’re sure the program does work. A quick Google search found plenty of message boards with lots of happy clients mixed in with those who were less than satisfied.

There’s no argument that it’s a popular program. More than 80,000 of the products have been sold in 2010 through Dec. 27, the company said, and the website boasts more than two million customers.

Bamboozled has never tried it, though we have seen some of Cummuta’s books over the years. We have no complaints about the basic advice. The part that bugs Bamboozled about this debt reduction system and others like it is that you, the consumer, can do it all on your own, for free.

If someone is trying to pay off debt, should they really pay hundreds of dollars up front, with no promises, for a box filled with media?

The “Transforming Debt into Wealth” website has an answer to that question.

It says a typical household with $60,000 in annual income could save more than $150,000 in interest and build more than $2 million in a retirement portfolio in the same time it would have taken to pay off a mortgage the conventional way, all by following the system.

Bamboozled’s answer? Don’t let someone transform your debt into their wealth.

If you need help creating a plan to pay off your debt, consider contacting a reputable credit counselor through the National Foundation for Credit Counseling at nfcc.org.

Or contact The Star-Ledger. We offer “Get With The Plan,” a money makeover column that appears every Sunday, in which certified financial planners give readers money advice about debt, savings, retirement, college, insurance and more. We even change your name to protect your identity.