There’s no way to describe the feeling when you lose someone you love.

In addition to the swell of emotion, those left behind have to cope with a mess of paperwork. That’s what’s haunting Michael Sorrentino of Lakewood, who recently lost his wife, Mary. They were married 33 years.

Mary was the one who took care of the household bills.

After her death, Michael Sorrentino, 71, took over the family finances. One day, he read his Verizon bill and found a few surprises.

“Upon analyzing the current statement, I discovered that there was an additional charge of $13.84 from AT&T for state-to-state calls,” he said. “We have the Verizon Freedom Essentials Plan, which includes calls within the country.’’

He called Verizon to find out why he was seemingly being billed twice for long-distance coverage. That’s when he learned it wasn’t his main line that had the AT&T service. It was a second line, and he was told the charges for that line had been on the account since 2005. 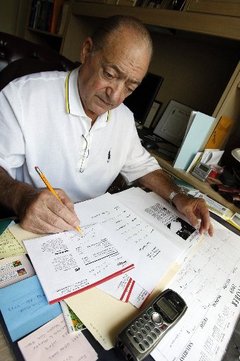 Sorrentino said he remembers his wife calling Verizon in 2006 about a charge she wanted to question, but he couldn’t remember the details. After many calls about the current costs, Verizon agreed to refund a year of charges and AT&T, three months of charges. But Sorrentino still had questions.

“We’ve never had a second line,” he said. “I feel that not only have I been Bamboozled but also double-whammed.”

Bamboozled contacted AT&T and Verizon to learn more about the phantom line and the related charges.

Unfortunately, because of the way phone carriers keep records, this is one of those cases where we’ll never know the full answer. Only Mary Sorrentino would know.

Records show the second line dates to at least 1999, and that it was changed from Verizon to AT&T long-distance service in 2005. Exactly why, or how, no one can verify, because the carriers don’t keep those records.

It’s possible the couple mistakenly switched service because they didn’t read the fine print on an offer. Back then, long-distance companies commonly sent promotional reward checks to potential customers, and the fine print would state that by cashing the check, the customer is agreeing to change long-distance carriers. The same carrier-switch method, via fine print, was popular for promotional one-month gym memberships and the like.

No activity for this line was recorded “for some time,” said Verizon. While it keeps phone bills for at least two years, it doesn’t keep records of each and every call because most customers have some form of unlimited calling package, it said.

Verizon confirmed Mary Sorrentino did call in 2006 about downgrading her service package, but Verizon’s notes don’t indicate a second line was discussed.

Verizon records also show someone claiming to be Michael Sorrentino called in April 2007, but the caller was unable to verify the account, and no changes were made.

Mary Sorrentino called again in September 2008, and she told Verizon she was not aware of the second line, and she was going to discuss it with her husband and call Verizon back. She never did, according to Verizon records.

“Mary called to ask questions about her bill or to verify that we received payment a few times over the years” said Tom Maguire, Verizon’s president of the mid-Atlantic area.

“This would lead me to believe that she saw the Verizon and AT&T charges associated with the second line at some point. Strangely, though, she did ask about the line in September of 2008, the charges appeared on next month’s invoice and no one called to question it. They paid it as usual.’’

What’s missing from the paper trail is the how, who and why the line may have been established.

The line has been disconnected and Verizon gave Sorrentino credits back to Mary Sorrentino’s September 2008 call. AT&T also credited Sorrentino for the same time period.

Sorrentino is happy to see the credits. Still, he thinks he shouldn’t have to pay any charges for this line, which he maintains he and his wife never had.

The lesson here is that it’s important to always read your bills, and read them thoroughly, even if the monthly charge seems to be the amount that’s usually due. If there’s a charge you’re unsure of, call and ask. Otherwise, you could be paying for months, or even years, for a service you don’t want, need or even realize you’re receiving.

Bamboozled received an anonymous letter from “A Few Disgusted Taxpayers,” a group of Jersey City residents frustrated with the municipality’s slow response to what seems to be a relatively simple request.

Several “no parking/street cleaning’’ signs were removed from Erie Street between Eighth and Ninth streets about two years ago during the demolition of Saint Francis Hospital, which was replaced by a condo complex. The signs have not been reinstalled.

“The construction has been completed,” wrote Disgusted Taxpayers. “Now, vehicles can park on the western side of Erie Street, and pedestrians may use the sidewalk. The problem is that the street has not been cleaned in months.”

Additionally, people who don’t have proper parking permits leave their cars in those spaces, Disgusted said, so now residents with the proper permits can’t find spaces.

Disgusted said residents have been making the sign replacement request for the past nine months.

Bamboozled called Patricia Logan with the Jersey City Division of Engineering, Traffic and Transportation. She said the work orders were submitted in October.

Logan said the job was a priority, noting rainy weather had caused delays for the work schedule. When the weather finally cleared enough last Friday, the signs were installed, she said.

Bamboozled hasn’t made it out to Erie Street, so Disgusted Taxpayers, please confirm the signs went up.