This is the time of year when prospective college students and their families are making final decisions about college admissions and financial aid packages.

It’s a happy and exciting time, but there’s a ghastly concern that parents need to consider if they plan to co-sign student loans for their students: the untimely death of a child.

Carolyn and Derek Mahoney relive that nightmare once a month, when their son Derek Jr.’s student loan bills arrive in the mail.

The Mahoneys describe Derek Jr. as a model student and a stellar athlete who broke records at Manalapan High School for track and field. When he went on to college at Temple University’s business school, he took out student loans that were co-signed by his parents.

When Derek Jr. graduated, like so many others, he had tens of thousands of dollars in student loans. He found work as a management associate for a nationwide business, earning a salary that allowed him to meet his financial obligations every month. His college loans were in good standing.

But when he died, the financial burden was left to his parents, his co-signers.
More than $27,000 of loans. 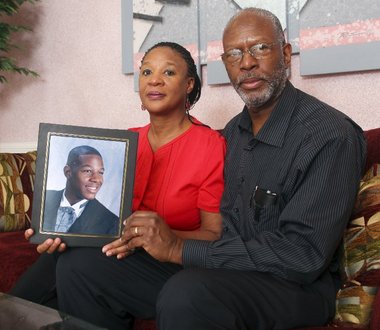 The Mahoneys are far from rich. Derek Sr. was laid off from his job in 2009.

“He withdrew all of his 401(k) to make sure that the bills wouldn’t get behind and we wouldn’t lose our house,” Carolyn Mahoney said. “We were able to stay afloat but we don’t live extravagantly.”

Derek Sr. now works as a consultant, but his income is inconsistent. Carolyn works full time.

After their son’s death, the Mahoneys contacted Sallie Mae several times to ask that it consider forgiving the loans. The lender decided the loans would stay in force. In a letter, it expressed condolences to the couple, but said the loans would be transferred to them.

Subsequent conversations with Sallie Mae changed nothing, they said.

“Although we certainly understand that as co-signers we are legally responsible for the repayment of those loans, we nevertheless hope that they will reconsider the heartless manner in which those debts were transferred to me and my husband,” Carolyn Mahoney said.

The couple has continued to make timely payments on the loans, but it’s a painful reminder that their son is gone.

They remembered a Bamboozled column from 2012.

Back then, we had written about several families whose deceased children’s student loans were forgiven after they were initially reassigned to the co-signing parents.

In one case, we specifically asked Sallie Mae to reconsider forgiving the student loans of a woman who died. The loans had been transferred to her parents and her grandmother, who had co-signed. Sallie Mae forgave the debts.

We contacted Sallie Mae about this case, and it contacted the Mahoneys the next day to start the process of analyzing where they, and the loans, stand.

We asked how Sallie Mae handles these situations generally.

“In the event of such a tragedy, the outstanding balance is canceled and no further payments are required from the estate or the co-signer — if there is one,” she said.

“Sallie Mae was the first national private student lender to provide this safeguard.”
But the Mahoney loans were older than that, so in these cases Sallie Mae works with “the co-signer to assess their financial situation and we modify the loan terms, if necessary.”

“We are undertaking this process with the Mahoney family now,” she said.

Bamboozled hopes you never experience the loss of a child, but we also hope you will take steps to protect yourself and to understand your obligations before becoming a co-signer.

The U.S. Department of Education says if a borrower dies, federal student loans will be discharged. Same goes for parent PLUS loans.

But private student loans are another matter. Some lenders will automatically forgive loans when a student dies, while others will continue to pursue payment from co-signers.

Legally, private lenders don’t have an obligation to forgive any debt, so co-signers should expect that such loans will remain.

The only real protection is to consider a term life insurance policy on the life of the primary borrower — the student. These policies are inexpensive for healthy young adults — a couple of hundred dollars a year — and they can ensure that should the unthinkable happen, there will be funds to pay off any debts the borrower leaves behind.

A little life insurance is a small price to pay for peace of mind.

ON THE LEGISLATIVE FRONT

Bamboozled first explored the topic of student loan forgiveness when we learned the case of Christopher Bryski.

Bryski died in 2006 after a traumatic brain injury. Several of his student loans were forgiven by different lenders, including Sallie Mae, but Key Bank went after Bryski’s father — a co-signer — for the balance of the $50,000 loan.

After lots of public scrutiny, Key eventually forgave the debt, but the experience thrust Christopher’s brother Ryan Bryski into action. In 2009, he began to work with and pressure legislators to introduce a bill that would require private lenders to clearly explain to borrowers and co-signers what would happen to a loan in the event of the disability or death of the primary borrower.

The Christopher Bryski Student Loan Protection Act was introduced in 2010, but it never made its way through Congress. Bryski said his attempts will continue in this year’s legislative session, and he said he’s in discussions with several legislators to reintroduce the bill.

You can stay posted on what’s happening with the legislation at the family’s website.

There’s one other issue we’d love to see addressed legislatively. Today, if the repayment responsibility is transferred to a co-signer, the co-signer is not legally permitted to consolidate the private student loans.

Where’s the sense in that?

If you’re able to persuade a lender to forgive a debt that’s been transferred to you because of a death, you could still be in for one more surprise.

Debts in excess of $600 that are canceled by financial institutions must be reported to the IRS with a 1099-C, Cancellation of Debt, which should be sent to the IRS and to the debtor.

The amount of the canceled debt is considered to be income to the debtor, with some exceptions.

It’s come to Bamboozled’s attention that some lenders who have forgiven the student loans of borrowers who have died are sending those 1099-Cs to the wrong parties.

You see, if a co-signer receives the 1099-C under his or her Social Security number, that canceled debt will be considered income for the co-signer — and that could mean they’re in for a higher tax bill.

But according to Treasury Regulation Sec. 1.6050P-1(7), the co-signer, also called the guarantor, is off the hook.

“Solely for purposes of the reporting requirements of this section, a guarantor is not a debtor,” said Joseph Matheson, a certified public accountant with Matheson & Assoc. in Whippany. “(It states) that co-signers are not considered debtors for reporting purposes and that reporting is not appropriate with respect to a guarantor, whether or not there has been a default and demand for payment made upon the guarantor.”

That means the 1099-C should be issued to the deceased borrower, or to that borrower’s estate — only. It should never be issued to a co-signer.

Matheson said if you are a co-signer and you receive a 1099-C, you should contact the issuer and ask them to send out a corrected 1099-C, removing you as the debtor.