You may be a “problem gambler.”

Who wants that on their permanent record?

Quigley, 54, of Pompton Lakes, said he’s far from a “problem gambler.” He visits casinos three or four times a year on business, and another one or two times a year with friends. He enjoys blackjack, Texas Hold ’Em and a few other games of chance.

Then online gaming came to town, and Quigley was ready to sign up. He said he thought that for a few hundred bucks, it could be fun. 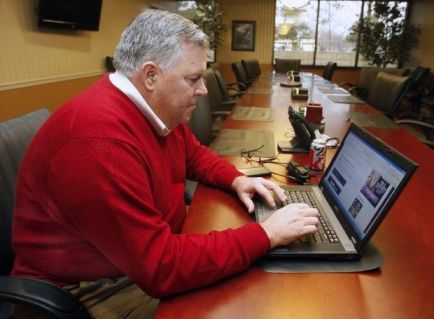 He said he thought hard about opening an account, saying he debated and weighed his options, wondering if signing up was wise for security reasons.

During his research, he said, the self-exclusion option caught his eye.

“I thought it was a chance for me to ‘opt out’ of having the internet gambling casinos send me stuff, post my information, etc …” he said in an e-mail. “Sadly, that’s not the case at all. I have to declare myself a problem online gambler in order to get myself excluded. I will not do that.”

Quigley called the disclosure “crazy,” saying in his line of work, fiscal responsibility is critical.

“If I was labeled a ‘problem gambler,’ the consequences could be extraordinary,” he said. “I’m in the banking industry, so I understand fully how internet security works, but still, errors happen. People make mistakes. There are absolutely no guarantees that my personal information will be safe, and that goes for the exclusion clause, too. I felt there is a chance it could leak out.”

Security and identity theft concerns are only some of the reasons why one may want to block themselves from internet gambling.

But if you want to opt out for reasons other than being a “problem gambler,” you’re out of luck.

The self-exclusion form, in several spots, has the signor admit to being a “problem gambler.” If you don’t agree to those provisions, you can’t self-exclude.

Back before internet gambling came to New Jersey, there were several versions of gaming-exclusion lists.

The original was not voluntary, but allowed the state to place suspected criminals and organized crime figures — alleged mobsters and racketeers — on a no-go list for the casinos.

Then in 2001, the state legislature directed the second type of casino exclusion, which was voluntary and allowed consumers to exclude themselves from gaming activities. It was meant to help those who said they had a gambling problem take steps to curb temptation.

Part of the New Jersey Casino Control Act, N.J.S.A. 5:12-71.2, states: “Any person may request placement on the list of self-excluded persons by acknowledging in a manner to be established by the commission that the person is a problem gambler and by agreeing that, during any period of voluntary exclusion, the person may not collect any winnings or recover any losses resulting from any gaming activity at such casinos and facilities.”

So the “problem gambler” status has existed for more than a decade, long before internet gambling was legal in New Jersey.

We could understand that, back in the day, no one would really want to exclude themselves from casinos unless they actually were a “problem gambler.” But today, with online gaming just gearing up, we wondered if the self-exclusion form has kept up with the times.

We started with the state’s Division of Gaming Enforcement. It said the language is in the form because it’s required by law.

“The Division has no authority to remove it from the self-exclusion form,” spokeswoman Lisa Spengler said of the “problem gambler” references.

We understand that. But we’re questioning whether or not the “problem gambler” proclamation is relevant anymore, or if it made sense for those who wanted to avoid online gaming for other reasons. We asked about customer scenarios, such as those who might be concerned about online scams and identity theft.

Spengler said the information on the forms is secure.

“Be assured, that all information provided as part of the New Jersey Casino Gambling Self-Exclusion Program is confidential between the Division and casinos/operators,” she said,

We wanted more, so we went to the source: Rep. Leonard Lance (R-7th District), who when he was a state assemblyman back in 2000, sponsored A-2517, the bill that led to the self-exclusion legislation.

Maybe he could explain why one had to deem himself a “problem gambler” to opt out.
We shared examples of non-problem gamblers who might want to be excluded.

“My boss’s law was built for people walking in-person into a casino where self-admitted gaming addicts could voluntarily register their consent (and) be ejected,” spokesman John Byers said in an e-mail. “It’s like anticipating falling off the wagon and being proactive about it. How this relates to online gaming 13 years later is a question for today’s legislature and the Division.”

We tried that, but we weren’t done yet.

Next, we turned to the Council on Compulsive Gambling of New Jersey (CCGNJ), a nonprofit group that offers help to those with gambling problems.

Jeff Beck, the group’s assistant director for clinical services, treatment and research, said when the self-exclusion list first came about, CCGNJ made comments about it, saying it was the organization’s belief that there wasn’t a need for the “problem gambler” statement on the form.

But then the law was passed, so all parties must abide by the law, he said.
Beck said he understands why some would hesitate to sign up because of that phrase, and to him, anything that encourages people to sign up is a good thing, he said.

Anything that holds people back is not.

“If admitting to being a problem gambler is a roadblock to going on the list … I understand that’s the law but it doesn’t seem to make much sense,” he said. “Anything that’s going to make it easier for people to sign up, we will support.”

When asked what his reaction would be if a legislator took action to remove that phrase from the form, Beck said he’d support it.

He noted there are other issues with the self-exclusion process that should be reconsidered. For example, while you can self-exclude in person, if you want to do it online, you have to do it through your online player account.

“In order to self-exclude online, you have to open an account online,” he said. “That doesn’t make a lot of sense to me either.”

Gaming Enforcement’s Spengler said that to ensure strong authentication that the person requesting self-exclusion is actually that person, a person online uses their player account as a means to self-exclude, or they can do it in person.

That’s like telling a gambling addict to ask a pit boss not to let him play, with a sign-up sheet at the roulette wheel.

“A player account can be created without depositing money or wagering,” she said, noting the division is working on another option that would allow self-exclusion sign-ups through a portal on the Division of Gaming Enforcement website.

“That option is still being developed but will be available in the near future,” she said. “The Division is committed to promoting responsible gaming not only in Atlantic City casinos but also on the Internet.”

To learn more about self-exclusion, check the Gaming Enforcement web site. If you have a gambling problem, visit 800gambler.org or call 1-800-GAMBLER.