It was close to midnight on July 11, and Michele Beckman was home with her two children, 15, and 13, when the damage happened.

“I walked out of my daughter’s room and into my office, which is a few feet away, when I heard a huge bang,” Beckman said. “I ran out of the office and there was a huge tree limb sticking through the roof, right above my daughter’s bedroom door. It was exactly where I was moments before. It would have killed me.”

There were no injuries, but when the tree limb fell on Beckman’s Rockaway Township home, it left three basketball-sized holes in the roof. There was also damage to the aging deck, making it unsafe, Beckman said.

That’s a horror for any homeowner, but the Beckman’s financial situation made the incident more precarious.

Beckman and her ex-husband, Steve, had recently completed their divorce. Their home has been for sale for four years. They were behind on their mortgage, and the home went into foreclosure.

When the tree limb came though, they were under a short sale agreement.

There was no extra money for major repairs, so when their insurance company came through with checks to cover the damage, they were relieved.

But that was the start of the real trouble: bureaucratic rules, paperwork, red tape and delays. 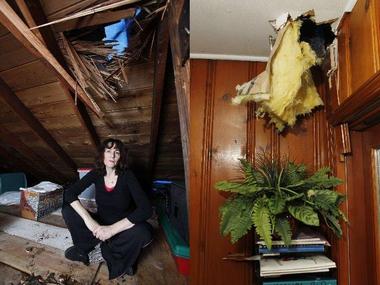 He set out to get the checks endorsed at local bank branches.

“Chase bank signed the check. Citi would not. The Citi branch in Morristown connected me to a manager who also said no, who then at my request connected me to his boss,” said Steve Beckman.

The boss also said no.

No endorsement, no repairs.

The Beckmans had gotten an estimate of $8,000 to fix the roof and the deck damage, and the contractor was willing to accept the insurance payout of $5,400. But without a check endorsement from Citi, the work couldn’t get started.

Steve Beckman said Citi had a batch of paperwork for him to complete before it would endorse the checks, and he would have to mail the checks rather than have them signed at a branch.

To Steve Beckman, that seemed like a waste of time, but he completed paperwork anyway. Still, he didn’t send the checks, and he fought with Citi, back and forth, well into September. Given the foreclosure and short sale status of the home, he was afraid the bank would hold back repair money if he mailed the checks in, so he simply wanted to do it in person.

That’s what Chase did, so why not Citi, he asked, saying he was only trying to do right by his family and have the repairs completed.

“Now the winter’s settling in. I have the checks. I don’t mind if they don’t want to put it in my account — I’d gladly have them pay the contractor directly,” he said.

But no. Citi won’t do it that way.

But it wasn’t just paperwork and mailing the checks.

Beckman said he was told after he sent in all the requested forms that Citi would send out a building inspector who would come out and work with the contractor to sign off on the job and make sure the work gets done.

“It’s just intolerable. We’re going through a short sale, and my ex and the kids are living there for months with holes in the roof,” he said. “What, do they think I’m going to run off with a few thousand dollars?”

We reached out to CitiMortgage in early October to see if it could hurry things along.

Citi promised to look into it.

On Oct. 5, with rainy weather in the 40s and 50s, Beckman said he spoke to a rep and he decided to give in. He’d send the checks to the company rather than hope for a quick endorsement at a local bank branch.

“It’s just terrible. Now it’s raining and cold and I sent away the checks,” he said. “I feel responsible. They told me they were going to make an exception and expedite it.”

Exactly what that exception would be was not made clear.

On Oct. 10, Steve Beckman spoke to a Citi rep who said once it received the check, it would endorse it, then make a check out directly to the contractor.

The bank also said it made an appointment to meet the contractor.

On Oct. 15, Beckman received a call from the contractor, who said the bank called to say it received the check and the contractor should be able to proceed by the end of last week, or the start of this week.

We followed up with CitiMortgage to ask what the delays were all about, and to see what would happen next.

Spokesman Mark Rodgers said the bank, as the servicer on the first mortgage during an “active foreclosure,” had to work to protect the interests of the owner of the loan.

“For property damage issues, we provide the homeowner with an insurance claims package and instructions on how to complete the process,” he said, noting that insurance funds are not fully released until the homeowner provides the required documentation, such as cost estimates and contact information for the contractor – stuff Steve Beckman said he had already done.

The one item Beckman didn’t want to see leave his hands was the check.

“Having received the missing documentation in this instance, we have now been able to expedite the process,” he said.

He did not explain what “expedited” means.

Steve Beckman disagrees, saying through the process he was transferred from rep to rep, always needing to re-start his story. There was nothing expedited about that, he said.

On Oct. 16, the contractor called Beckman again, saying he was given the go-ahead to start working on the roof and the bank would pay.

The contractor would also be due a $500 insurance deductible that the homeowners would have to pay, but the contractor agreed to forgo that payment, Beckman said.

Nice to hear from a good guy.

Beckman said the short sale is still going through – as far as he knows.

“We are constantly getting paperwork and requests, and we comply, but who knows what,” he said. “Everybody I speak to doesn’t seem to know anything.”

We’re asking Citi for answers on that front, too.

In the meantime, Michele Beckman is looking for rental, but she hasn’t found one that’s “suitable or affordable,” Steve Beckman said.

“I am looking for a miracle to somehow…save the house, the neighborhood, the pets, and the ex-wife attached to my two kids, from further discomfort,” he said.

Maybe no miracles, but at least the home can have a roof that you can’t shoot hoops through.