The sewers continue to spew waste, and more homeowners are coming forward with stories of insurance claim denials by

As the sewer systems of these towns age, accidents are bound to occur. Lines get clogged. Stuff happens.

But there seems to be a pattern. A homeowner notices raw sewage seeping, sometimes pouring, into a basement. The municipality’s public works department finds a sewer-line clog at the street level — the cause of the waste back-flow and the municipality’s responsibility to fix. The municipality says the homeowner should file a claim with the town for whatever losses are not covered by homeowners insurance.

The claim is then denied.

It’s not only happening in Clifton. The latest case Bamboozled encountered was in Roselle Park, a Union County borough that belongs to the New Jersey Intergovernmental Insurance Fund (NJIIF), a self-insurance pool of more than 30 municipalities. NJIIF is serviced by Inservco Insurance Services, a subsidiary of Penn National Insurance of Harrisburg, Pa. — the same organization that denied the homeowner claims in Clifton. 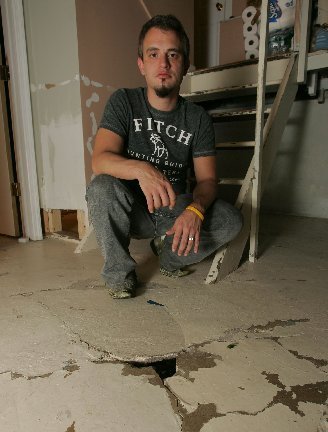 At about 11 p.m. on March 13, raw sewage flowed into the partially finished basement of Sean Kinney’s Roselle Park home.

It was the third such incident in less than a year, and it was by far the worst.

‘‘Then the cap popped off a foot-and-a-half in the air, landed on the floor and the water came through the pipe,’’ Kinney said. He said within 10 minutes, there was a 2-inch coating on the floor.

Kinney said he immediately called the police, who were unable to reach public works department employees. The fire department responded instead, by which time 8 inches of muck covered the floor.

The fire chief lodged two towels into the open line in an effort to impede the flow. Instead, the flow was redirected, Kinney said, to the rainwater drainage system beneath the concrete floor.

‘‘While the chief was crossing the basement, the floor began to rise and cracked open under the water pressure,’’ Kinney said.

Calls to the department of public works continued throughout the night, and the sewage continued to flow.

It wasn’t until noon the next day — 13 hours later — that public works employees arrived on the scene.

By then, there was approximately 2 feet of sewage in his basement, Kinney said.

He directed DPW workers to the manhole cover where previous blockages occurred.

The department of public works found the problem and flushed the line.

‘‘I was told they were going to monitor and regularly flush our line,’’ Kinney said.

On March 18, department of public works employees dropped a camera into the line and removed additional blockages, Kinney said, calling what they found evidence of the main line blockages that Kinney blames for the previous backups.

The previous backups? Kinney said after his basement was covered with 2 to 4 inches of wastewater, solid waste and bathroom refuse on May 7, 2009, DPW flushed the line.

‘‘I was told by the DPW employee that they would monitor and jet the line regularly,’’ Kinney said. ‘‘He told me that it would not happen again, and it would be properly addressed.’’

THE CLAIM AND THE DENIAL

Damage to Kinney’s house was $37,293, including property loss and repairs.

He recovered $5,000 from his homeowners’ insurance. For the rest, he filed a claim with Roselle Park.

The claim was denied.

In a series of e-mails between Kinney and Inservco senior claims representative Casey Grouser, Grouser said the denial was based on a series of immunities found in several statutes, and that Kinney’s first two sewer mishaps were unrelated incidents.

Grouser said in an e-mail: ‘‘I can not find any negligence on behalf of the Borough of Roselle Park.” Grouser wrote that a major storm was the culprit, and the municipality can’t be held responsible for the weather.

But that doesn’t fly.

An “Act of God” is an “Act of God.” Yet, had Roselle Park’s department of public works properly maintained the main line after the first two incidents, would a stormy day have made such a difference?

Roselle Park department of public works logbook records acquired by Kinney and reviewed by Bamboozled show there were service calls to Kinney’s home on May 7, 2009, and June 6, 2009. The logbooks state, “Our problem,” both times.

Kinney also requested maintenance records between the date of the first incident and the big one on March 13. He received a letter from department of public works head Vincent Cahill, which said: “The Department has no maintenance schedules or records showing any maintenance on (Kinney’s home).”

Cahill, interestingly, was also the head of Clifton’s department of public works during the sewer mess cases we covered in previous stories. He resigned in June 2009 after a sexual harassment lawsuit was filed by two female Clifton DPW employees against Cahill, Clifton, its DPW and another employee. The lawsuit is pending.

Bamboozled also reviewed signed statements by several witnesses who support Kinney’s version of events on the dates of all three sewage backups and the statements Kinney said the DPW made about the blockages and future service to the line.

Bamboozled had a lot of questions for authorities from Roselle Park, Clifton, Inservco, parent company Penn National and the New Jersey Intergovernmental Insurance Fund. Most did not return calls and e-mails.

A Penn National spokesman said it could not comment on individual cases, disclose how many New Jersey municipalities employ Inservco or how many sewer claims it has denied in the state.

We also wanted to ask how in the Roselle Park case, Inservco could say the first two main line clogs that affected the Kinney home were unrelated to the big one. No response.

We wanted to ask why in Clifton, two families were told their claims were denied because Clifton had no prior knowledge of a main line problem, yet Bamboozled spoke with residents who reported prior problems, serviced by the department of public works, on the very same lines. No response.

We wanted to ask if Inservco, as third-party administrator, sets the policies on which claims are denied, or if the municipalities or their insurance funds do. No response.

We wanted to ask Roselle Park why, after Kinney was told his line would be monitored and flushed regularly, department of public works documents show that didn’t happen. No response.

We also wanted to ask why the Moroses family, the first Clifton sewer family we profiled, is only being offered $3,500 to settle their more than $10,000 claim. No response.

And finally, we wanted to ask Clifton if it has changed its policy requiring a plumber to confirm there is a main line problem before department of public works will report to a home. Again, no response.

Don’t the citizens of these municipalities deserve better?