Terry Payne and her mother, Yolanda Payne, say they hired a contractor for work in their Edison home. 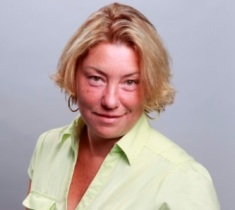 They say he didn’t finish the job, didn’t deliver materials they paid for, and some of the work he did was substandard.

The contractor has a different version of events. More on that later.

Terry Payne said the contractor — Al Annunziata of Bellamore Bathroom Remodeling of Freehold — gave them a price of $21,100 for a remodeling job.

The job started smaller, but the homeowners added items after the contract was signed. Work would include remodeling two bedrooms and a bathroom on the second floor, and remodeling a hallway, a bathroom and removing paneling in the living room on the first floor, Terry Payne said.

“Al promised the work would be completed the day before Thanksgiving,” Terry Payne said. “We were adamant that the work must be completed prior to the holidays.”

Demolition began the next day.

“He started work, seemed very nice, befriended us, told us he would never do to us what some ‘bad’ contractors do,” Payne said. “He said he feeds the homeless in the tent city down south, that he was a religious man. We bought his story.”

She said at first, work was moving slowly, but it was steady.

On Sept. 30, Payne said, she paid Annunziata $2,000 for more materials. Then on Oct. 1, he asked for another $3,000 in cash, which would be for labor, she said.
Terry Payne says she took this photo of a bedroom after sheetrock was removed by a new contractor. She said it shows a piece of wood that has a loose outlet in it, that there were four pieces of wood that had only one nail in each, and the sheetrock that had been installed moved when it was touched. She said the 2x4s were not nailed into the roof, and there was no insulation.

“We gave him money to buy fixtures, flooring, tile, sheetrock, insulation, etc., and he said he would make the purchases because he gets a contractor’s discount,” she said. “We paid him for labor as he went.”

“I began asking Al to produce the items he was supposed to have purchased,” Payne said of a Nov. 6 conversation. “He said they were at his warehouse.”

Payne said she started to get nervous, so they had a sit-down when Annunziata arrived the next day.

The Paynes wanted to see the materials, and they were concerned about the job’s pace. They said they couldn’t imagine it would be done by Thanksgiving because, they said, Annunziata and his one worker would arrive around 10 a.m., take a two-hour lunch and finish the day at 3:30 p.m.

“He was again evasive about the product but promised he would work full days and work Saturday and Sunday to catch up,” Payne said. “I advised Al that we would have a meeting the end of each work day, go over what had been done and what he would do for the next day.”

The next day, Nov. 8, a Saturday, Payne said Annunziata arrived without any materials for her approval.

“He got frustrated and angry and began throwing tools around. I asked him to leave for the day. He said he would be back Monday to work and he would bring the product,” she said. “I told him that he promised to work on Sunday to catch up. He very reluctantly agreed. He said he would be here at 9:30.”

“He said he overslept and would be here in an hour,” she said. “During that time I wrote all the paperwork up to try to get him to sign in an attempt to keep him on track.”

When he arrived, he did sign the paperwork, Payne said, which detailed what all previous payments were for and what work was left. But the work didn’t begin anew.

“Immediately after, he, his wife and her sister came inside and removed all his tools,” she said. “He said he had work to do at home and he would be back the next day with the 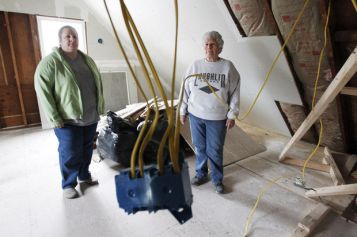 Payne still wasn’t comfortable, she said, so she called Home Depot and Lumber Liquidators — the stores where orders were supposedly placed by Annunziata. Both retailers said they had no orders from the contractor for her home, and Home Depot specifically said the last order the contractor placed was in March, Payne said.

When she called, the contractor said his wife’s vehicle broke down and he can’t drive, so he’d be there on Tuesday, she said.

But on Tuesday, no one came.

No word on Wednesday, Payne said, so she said she called on Thursday.

“He said if I apologized to him he would come back. He also said he would put a lien on our home,” Payne said. “At this point I became very scared of him, obviously he was not in a right mind. I ended the conversation and never called him again.”
Terry Payne said she took this photo after sheetrock was removed by a new contractor. She said it shows the living room dormer. Below the dormer had insulation, but she said the side wall has no insulation in one section. She said insulation was stuffed into a different section, which was not supposed to be insulated.

Next, Payne called in other contractors for estimates and to review the work that was done. She said they noted several problems.

“Two-by-fours were not nailed in, nothing is measured correctly, sheetrock was attached by one or two nails. The exterior walls have spotty insulation at best, and some areas have none,” she said. “Al would show us the insulation, we would leave the area, he would take it down, sheetrock and move the insulation to the next area.”

Payne filed a complaint with Consumer Affairs that week, and she reached out to Bamboozled.
LOOKING FURTHER

Consumer Affairs in Monmouth County said it had two open complaints against the business, but said it couldn’t discuss them because they’re ongoing.

Bellamore has a valid Home Improvement Contractor (HIC) registration with the state, but it’s listed under the contractor’s wife’s name.

We also reviewed the initial contract, which says the company is “licensed and insured.” It does not list the company’s HIC number, or a start or end date to the project — items required by state law.

Contractors must also give homeowners a copy of their commercial general liability policy and telephone number of the insurance company, but Payne said she didn’t receive that either.

We explained the consumer’s complaint to Annunziata.

“I don’t know what she’s saying,” he said. “There ain’t no materials. Tell her to make sure she pays me the 5k. Tell her that.”

We asked about payments Payne said she made, the insulation issue, and whether or not he had purchased items that were not delivered to 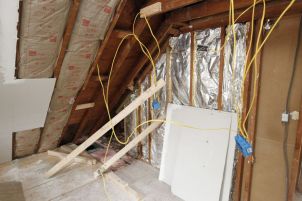 the home. Annunziata disagreed with Payne’s accounting of events, so we sent him a detailed email with all of the customer’s complaints, and asked for his response.

The next day, we asked Annunziata if he had read the email.

He said he didn’t receive the email, but he said he hired an attorney.

“I want my money. I hired a very prestigious lawyer. I want my 10k,” he said.

“Well, I don’t even know how much that was. I haven’t looked at the paperwork,” he said. “My lawyer said he could put a million dollar lien on her property and I can put liens on her cars.”

He also complained that the homeowner put negative reviews online.

“I don’t like that,” he said. “She said we were scumbags and scammers.”

We confirmed that we had his correct email address, and he then said he hadn’t checked for an email, but he would in 30 minutes.

So an hour later, we called him again. He wasn’t available, a worker said, so we left a message.

We called again the next day, and Annunziata said he hadn’t received any emails.

“Like I said, they owe me money,” he said, noting he has four doors that were purchased for the home. “If they want their material, they gotta pay the man. No pay. No materials.”

We wanted to ask why he initially told us there were no materials, but we instead asked him to check for the email, which we sent for the third time. He said he’d call 45 minutes later.

When Annunziata called, he said he didn’t receive the email, but that he had been going over the contracts.

He said he had the doors and the flooring — which he agreed the Paynes had paid for — and that he ordered a window at Home Depot, which was also paid for by the Paynes, but it was on back order.

He also said he has boxes of tiles that were left over from a previous job that Payne had agreed to buy for $700, but he never received money for the tile.

“I want to fix the problem,” he said. “I’m not running away from the problem. She never gave me the chance to finish the job.”

He offered to deliver the items to the Payne home, or send them a check for $2,646 — the cost of the flooring, doors and window.

“I don’t want no bad blood. This is what they got invested,” he said.

We left a message about the offer with Payne, and we while we waited, we called Annunziata back to ask about a few more items.

He said the other complaint with Consumer Affairs had been “taken care of,” and that he would call the agency to make sure it updated its records.

We also asked about the insulation that Payne said was missing when sheetrock was removed.

He said he’d tell his secretary to put a check in the mail.

When the Paynes called us back, we explained Annunziata’s offer.

“We’ll put it towards the stuff he messed up,” Payne said. “It’s embarrassing, but I don’t want this to happen to anyone else.”

Annunziata said he mailed the check on Saturday, Nov. 22. By the end of the day Tuesday, it still hadn’t arrived, Payne said.

We called Annunziata and he said it should get there any day now.

By the end of business Friday — the day after Thanksgiving — the check still hadn’t arrived.

Let’s hope there’s something in the Payne mailbox today.

Have you been Bamboozled? Reach Karin Price Mueller at Bamboozled@NJAdvanceMedia.com.