When Julie Sueta needed a car, she did her research.

Sueta talked to friends about brand recommendations, and she decided to shop for a previously owned Mercedes.

Then she researched different dealerships. When she called Euro MotorCars Devon in Devon, Pa., the salesman said it was one of the largest dealers of certified pre-owned Mercedes in the area, selling more than 80 Mercedes per month.

The salesman told her all their cars meet very specific requirements.

“This gave me a comfort level that they were not just selling any used Mercedes,” Sueta said. 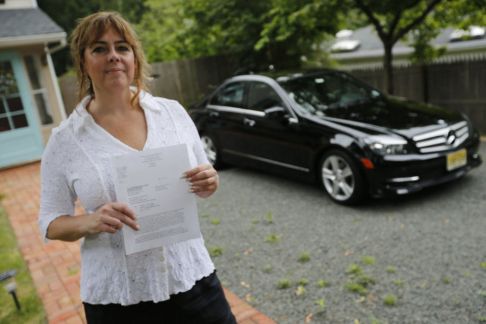 In less than a month, Sueta said, she started hearing grinding noises from the engine.

Rather than take the car back to Pennsylvania, Sueta visited Mercedes-Benz of Morristown, an authorized service department for the brand.

Her first visit was in August 2014. The problems weren’t fixed, and over the months that followed, she took the car at least other 11 times, she said, to no avail.

And each time she left the car for service, the mechanics held onto it longer and longer to try to fix the issue, she said.

“The problem has been described to me as an engine issue where there is a problem with the belts, which have been repeatedly replaced and shimmed,” Sueta said. “Although the car is not currently making the noise, I have been advised that it will return.”

Sueta said the Morristown workers were sympathetic, but she said they told her that their hands were tied by Mercedes’ corporate office.

After about four months of trying to fix the problem, the dealership asked Mercedes USA to contact Sueta, she said.

“[The rep] was less than helpful and offered no solution,” Sueta said. “I spoke with her on numerous occasions and requested to speak to her supervisor. She indicated that there was no one above her which I know is not true.”

Sueta said finally, after one of the longer service appointments — some actually lasted weeks, documents show — the service manager said Mercedes USA would be sending “something.”

A few weeks later, Sueta received a check for $700 as a reward for her loyalty as a customer.

“My service rep indicated that they had seen the issue before and that it had never ended up permanently repaired — that the issue just kept coming back,” Sueta said. “The only time they had seen it fixed was if the engine was replaced or the car itself was replaced –both of which happened on previous occasions.”

She said she was also told the mechanic was frustrated because he’s had to make the same repair over and over, but it hasn’t worked.

“I do not feel safe,” Sueta said. “I have been told road failure is an option at any time.”

Sueta decided to hire an attorney.

Lewis Cohn of Witman Stadtmauer wrote his first letters to Mercedes USA and the two dealerships on Sueta’s behalf in late May 2015.

For those of you not familiar with the federal and state lemon laws, Cohn offered an explainer.

He said the Magnuson-Moss Warranty Act protects consumers who obtain manufacturers’ warranties for consumer products — including motor vehicles — by requiring that manufacturers stand behind the products to assure that the materials used and the workmanship provided are defect free or will meet a specified level of performance over a specified time period.

“Unlike other states which restrict their ‘lemon laws’ to new cars, New Jersey has adopted a separate Used Car Lemon Law to provide assurances that pre-owned motor vehicles are free of defects and malfunctions and are fit for normal use and personal, family or household purposes,” Cohn said.

In Sueta’s case, Cohn said, the manufacturer’s warranty that Sueta received at the time of purchase expressly provides for a replacement in the event that the Mercedes vehicle fails to perform as represented.

Cohn wrote again to the three entities in July with a copy of a proposed complaint that he said Sueta would file in court.

In less than a week, documents show, Mercedes USA responded, saying the “vehicle’s repair history does not meet [the] requirement” of ‘a substantial amount of repairs to warrantable defects.'”

That doesn’t cut it to Sueta and Cohn.

“Mercedes-Benz USA should provide Julie Sueta with a replacement vehicle of comparable age, use type and mileage — approximately 22,000 miles — as the vehicle that she purchased in May 2014,” Cohn said.

Second, the attorney said, the manufacturer should provide Sueta with warranty protection identical in scope and time of coverage as the warranties on the current car. Those warranties should run from the date of delivery of any replacement vehicle, he said.

They believe Mercedes should reimburse attorney’s fees, too.

If that doesn’t happen, Cohn will file suit on Sueta’s behalf.

Sueta said that while she still drives the car, she doesn’t feel safe.

“I basically feel stuck,” Sueta said. “I am not comfortable selling it privately or to another dealer. I would never misrepresent the condition of the vehicle which is obviously sketchy and unsafe.”

We reached out to both dealerships and to Mercedes USA.

Euro MotorCars Devon did respond, saying it wasn’t aware of the service issues because it hasn’t seen the car since it was sold. That doesn’t seem right, given that we’ve seen a letter from Euro’s attorney in response to Sueta’s attorney’s letter on this very topic.

Then we heard back from Mercedes USA.

A spokesman said after a thorough review, it appears that all reasonable efforts were made to satisfy the customer.

He said several “gestures of assistance” were provided, including complimentary loaner vehicles during service calls.

“To our knowledge, the customer never had to pay any out-of-pocket expenses for any dealer visit related to the original concern about engine noise,” spokesman Christian Bokich said. “Based on all available information, the dealership made many attempts to address the customer’s concerns, including a goodwill payment in addition to warranty coverage, and the customer was never in danger because the vehicle posed no safety risks.”

He said the spokesman made much of the fact that Sueta wasn’t charged for the repairs, but that’s specifically what the warranty calls for.

“On page 12 of the warranty, it is provided that, ‘Warranty repairs will be made at no charge for parts and labor,'” he said.

Cohn also took issue with the spokesman’s statement that not all of Sueta’s service visits were for the engine noise.

“He is right. Ms. Sueta has records reflecting 15 visits to the Mercedes service center. Three of these visits were for general servicing or other problems. That leaves 12 visits to address the ongoing problem with the engine,” he said.

And, Cohn said, even if there were fewer visits for the engine problem, the New Jersey Used Car Lemon Law says a manufacturer and its dealer are presumed to have had a reasonable opportunity to correct or repair a defect if the same issue was repaired three or more times without success, or if the car was “out of service by reason of waiting for the dealer to begin or complete repair of the material defect for a cumulative total of 20 or more days during the warranty period.”

Cohn said his client’s car satisfies both of these tests.

Plus, we’d argue that Sueta being told “road failure” could certainly be interpreted as a safety risk.

We sent Cohn’s comments to the spokesman, who said the company had no further comment.

So it looks like a lawsuit will be in the works. We’ll let you know what happens.