When a business makes a promise, consumers expect that promise to be kept.

And when it’s not, boy, it’s frustrating.

Lots of consumers give up when their complaints don’t yield results. If their problem doesn’t represent a large dollar figure, they decide it’s not worth their time.

“The amount of the refund is not what arouses my ire,” Weinstock said. “No one cares about the principle.”

Weinstock’s beef is with Bayer, the maker of Dr. Scholl’s foot care products.

He purchased a Dr. Scholl’s brand orthotic from a local pharmacy on Jan. 24, but he said it wasn’t effective.

The product had a money-back guarantee, so Weinstock wrote to the company on March 17 to request a refund. He enclosed a copy of his receipt and the UPC code from the packaging per the company’s request.

Weinstock sent the letter from his Arizona address, where he spends the winter months. He lives in New Jersey the rest of the year, during which time his mail from Arizona is forwarded once a week to his home in the Garden State.

A week later, documents show, Weinstock received a letter from Bayer at his Arizona address.

“We regret that this purchase did not meet your expectations and want to thank you for trying our products,” the letter said. “We are pleased to provide reimbursement for your purchase.”

The letter said the $15.99 refund check would be mailed under separate cover.

But by May, Weinstock hadn’t received the refund, so he wrote again to the company. He enclosed a copy of the refund notification letter, and he asked that the check be mailed to his New Jersey address, which he enclosed.

June came, but the refund didn’t.

Weinstock wrote again, sending copies of all the correspondence and again asking for the refund. 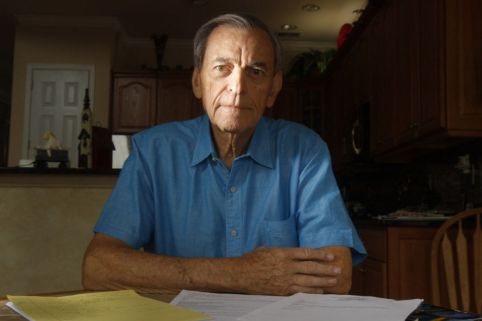 Another month passed with no check.

“It’s just unreasonable that no one seems to have cared enough to even respond — after the March 25 letter from Bayer),” he said.

So on July 6, Weinstock filed a complaint with the New Jersey Division of Consumer Affairs.

He didn’t hear anything back by the beginning of August, so he contacted Bamboozled.

We reviewed copies of the letters, plus the complaint to Consumer Affairs.

Then we asked Bayer to review the case.

It got back to us within hours.

“While our records show that a check was issued to Mr. Weinstock shortly after his original request, we understand that he did not receive it,” spokeswoman Tricia McKernan said. “This could be explained by the fact that at the time of the original request, we were in the midst of transitioning from one refund system to another as part of the integration of the Dr. Scholl’s brand into the Bayer portfolio.”

The spokeswoman said the company’s most recent records showed that on June 17, it sent a care package — samples of Bayer products — to the Arizona address, plus it re-issued a refund check that was sent separately.

We asked if the check was cashed or returned.

While it was checking, we talked to Weinstein, who reported he also got a call from Bayer’s manager of consumer relations operations.

The story the rep told Weinstein went further than the information we received.

The check that was initially sent after Weinstock’s first letter was indeed sent to the Arizona address, and the envelope was marked “Do Not Forward,” which is why it never made it to New Jersey.

The rep then explained the company later sent the care package and the second check, which was also returned rather than forwarded.

Weinstock said he understood why the first check never got there, but then he explained that the June mailing would have gone to the New Jersey address if they “had they gone through the trouble of reading the letter I sent that said please send the check to New Jersey.”

The rep said a new check — and a new care package — would be sent right away. What she couldn’t explain is why no one responded to his second two letters.

“I explained to her the thing that really set me off was getting no response from the bosses, not even an acknowledgement,” he said. “She said something got screwed up somewhere.”

Then it got screwed up again. We think.

Weinstock had a conversation with Bayer, and the company indicated a check was in the mail. But then he received a letter discussing the mistakes, sent to his Arizona address, not New Jersey. If history was repeating itself, the check, too, would have been sent to Arizona with a “Do Not Forward” on the envelope.

So Weinstock spoke to Bayer again, and it said a check was sent on Aug. 17, specifically to his New Jersey addresses. So hopefully, that confusion has been corrected.

He said he’s glad he’ll be getting the check, but more importantly, his issue was finally addressed by the company.

“It’s not the 15 bucks. Fifteen dollars isn’t going to make a grave change in my life,” he said. “To me it’s the principle of the thing.”

Have you been Bamboozled? Reach Karin Price Mueller at Bamboozled@NJAdvanceMedia.com. Follow her on Twitter @KPMueller. Find Find Bamboozled on Facebook. Mueller is also the founder of NJMoneyHelp.com.