Sometimes when Bamboozled goes to bat for consumers, it can take weeks, or even months, before their cases come to a conclusion.

It took a few heated weeks for Nina and Liza Horowitz to win their battle for customer satisfaction.

The sisters had booked round-trip flights to Mexico for a family reunion and birthday celebration for their grandmother. The Delta and AeroMexico flights were paid for through Orbitz last summer for $1,794.98.

Orbitz gave them confirmed seats, but when they arrived at the airport on Dec. 21, they were told they didn’t have reservations, they said.

There were no other flights available, and the women ended up missing two days of their vacation. They had to book new, more expensive flights — costing $3,144.82 — so they could catch the rest of their family reunion. 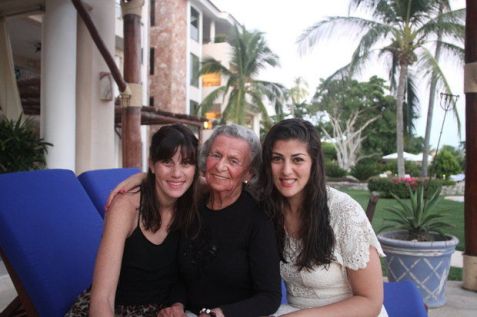 Initially, neither the carriers nor Orbitz was willing to take responsibility. Then Delta revealed its records showed one connecting flight was canceled the day before it was scheduled to take off, and Delta said it notified Orbitz. Orbitz said it was not notified.

A whole lot of finger-pointing ensued.

After Bamboozled got involved, Delta refunded the cost for the initial flight, minus the travel insurance premium. An AeroMexico rep promised she’d find a way to compensate them for the additional money laid out for the more expensive flight. Orbitz denied responsibility — something the family vehemently disagreed with, arguing they paid Orbitz, so Orbitz should be the one to reimburse them.

After the story ran, Bamboozled, the Horowitz sisters and their mom, Karen Kessler, continued to try to get Orbitz to refund the difference in cost between the two flights. Repeatedly, Orbitz said it was the responsibility of AeroMexico, while AeroMexico’s explanations were unclear.

Liza Horowitz continued to tweet about her experience and she emailed Orbitz daily. Kessler emailed every Orbitz board member and senior executive she could track down.

The board’s chairman was the only one to respond, sort of. He had someone reach out to Kessler, but that rep put the responsibility on AeroMexico.

And we kept asking questions, too, and we finally had an answer on Jan. 27.

Thought Orbitz insisted the incident wasn’t its fault, it said it was stepping up because AeroMexico was moving slowly.

“As we do not want to inconvenience Liza and Nina any longer, Orbitz will refund the difference of the new tickets purchased as well as the travel insurance,” a spokeswoman said.

Later that night, Liza Horowitz received the offer via email.

“As evidence of our concern, Orbitz will now be issuing a check for the remaining difference, including the cost of the Allianz travel insurance, for a total of $1462.82,” the email said.

And the next day, Orbitz reported AeroMexico would reimburse Orbitz for what it’s paying the sisters.

“I am so grateful to The Star-Ledger for following up and working on our behalf,” Liza Horowitz said, swearing she would never again book through Orbitz. “I am convinced without your help we would never have gotten any money back.”

“I was puzzled and angry when Orbitz kept passing the buck, denying any need to give a refund, blaming their airline partners and advising me to stop contacting Orbitz executives in our effort to get answers,” Kessler said. “Without the vigilance of Bamboozled and our nonstop insistence to the highest levels of Orbitz executives that my daughters were owed money, I highly doubt the company would have done much.”

Remember the “philanthropist-entrepreneur” who tried to hold a “summit” in New Jersey after Hurricane Sandy?

After Bamboozled was alerted to the event, William “Bill” Loiry was sued by the Division of Consumer Affairs, which alleged the event violated the state’s Consumer Fraud Act.

The state accused Loiry of conducting business under assumed names that were not registered, falsely implying that federal, state or local government agencies endorsed the event and using misleading advertisements. The state also asked that Loiry refund registration fees paid by consumers for the canceled event.

To date, Loiry has not refunded money to consumers, the state said.

There’s a hearing scheduled for Feb. 7, and the state’s previous request that Loiry be barred from holding events in New Jersey until the suit is settled still stands, the state said.

But Loiry wasn’t only banking on events in New Jersey. We got wind of Loiry’s arrival in Washington, D.C., for new events, and soon after, the attorney general for the district filed a complaint.

The district accused Loiry of misrepresentations. For example, the district said, Loiry advertised that an “American Energy Summit” would be held at the Washington Convention Center, but the district said no contract had been executed to hold the event there, or at any other venue in D.C.

The complaint also alleged that Loiry didn’t refund thousands of dollars of registration fees after the date of an event was changed.

The district received a preliminary injunction, stopping Loiry from promoting or collecting money for any events in D.C.

Still, we’ve heard Loiry has held events in other locations since the two suits. We’ll keep you posted.

Back in October, we told the story of Jim Mackie, who had purchased a Whirlpool dryer for his Beach Haven home from Dave’s TV and Appliance in Ship Bottom, but the dryer didn’t work. Several repair visits and replaced parts on the brand-new appliance didn’t do it, and Dave’s refused to replace the machine, or refund the money Mackie paid for an extended warranty.

The day after the story ran, Mackie got a call from a local PC Richards, which offered to try to repair the dryer free of charge.

Mackie gave Dave’s a little more time, but no one responded. So, he reached out to PC Richards.

Techs arrived with lots of tools and parts, Mackie said, but none was needed.

“We all have electronic gizmos that sometimes die. Simply unplugging for 30 to 60 seconds will ‘reset’ the device,” Mackie said. “Unplugging the machine … apparently achieved the reset.”

Sometimes the simplest answer is the best one.

After reading Mackie’s story, Rhonda Margolies of Parlin told us of her own struggles with Whirlpool.

She purchased a new Maytag refrigerator on June 11, but there was trouble from the start, she said. The doors creaked whenever the refrigerator or the freezer was opened.

After four visits from the repair guys, nothing had been fixed.

“The men have removed and lubricated the doors, raised and lowered the unit and finally changed the wheels, all to no avail,” she said.

Her repeated requests for a new refrigerator were denied, but she was persistent. Very, very persistent.

After six months of back and forth with the company, Whirlpool agreed to send a replacement, which arrived on Dec. 26.

“The gaskets seal tighter and operation is quieter. Best of all, the doors do not squeak. Opening and closing are blissfully quiet,” she said. “Chalk this up as a win. Persistence does pay off.”

Good for you, Rhonda!

We told you the garage door troubles of Ted Kossup last fall.

Kossup hired a contracting company — John Mallamace LLC of Totowa — for a $100,000-plus renovation on his Fairfield home.

All was well until it was time for the garage doors, a $5,880 add-on to the original job. The cost would cover the doors, decorative clavos, openers, keypads and remote controls, plus labor and clean-up.

Kossup said he paid Mallamace half, and the doors — but not the accompanying hardware — were delivered to Kossup’s home in November 2010. Because the doors had to be painted, and because Kossup’s paving contractor recommended waiting on the doors until the new driveway and pavers were installed, Kossup asked Mallamace to wait.

Kossup paid Mallamace the balance of the job in the fall of 2011, confident that the contractor would complete the job.

The driveway wasn’t completed until Aug. 2012, which is when Kossup said he reached out to Mallamace to install the doors.

For the next year, Kossup said, he was on the receiving end of unreturned phone messages and scheduled meetings that never happened. Finally, it was a delivery problem, Kossup said Mallamace told him. And then more phone calls were not returned.

Patient no longer, Kossup called Bamboozled. We reached out to Mallamace, who said Kossup could pick up the parts himself, and Mallamace promised to pay the bill for an installer.

Kossup kept his end of the bargain, picked up the parts and hired an installer, who finished the job in November. But Kossup, not Mallamace, paid the bill, because Mallamace didn’t respond and the homeowner just wanted to put it behind him.

“To pay him for the material he already purchased was okay, but I should not have paid him for labor he had not yet done,” Kossup said. “Oh well, live and learn.”