The economy may be on the mend, but New Jersey still had 257,953 people collecting unemployment benefits as of March 30, the state’s Department of Labor and Workforce Development said.

While most of those get them rightfully, some hucksters try to scam the government out of cash.

Since March 2011, anti-fraud programs have prevented at least $231 million in improperly paid benefits, a DOL spokesman said, calling it a “very conservative estimate.”

Stopping fraud is good, but not everyone accused of improperly receiving benefits has received them, well, improperly.

Last year, we told you the story of a Cape May man instructed to repay more than $19,000 in benefits that DOL initially said he received in error. After Bamboozled got involved, the man was told he didn’t have to repay the funds.

“We are honest and decent folk and tried to do the right thing with the state,” said Caputo, 63. “We moved to South Carolina and I continued to collect down here with their full knowledge. I even questioned them time and time again if I was still eligible to collect from the state. They told me I was.”

Should Caputo be held responsible for what appears to be bad advice doled out by the folks at DOL?

THE MOVE AND THE MISHAPS

After living in Somerset for decades, Caputo lost his job at a company in Edison in 2007.

Caputo filed his initial unemployment claim that summer, and in October 2007, his family moved to South Carolina. 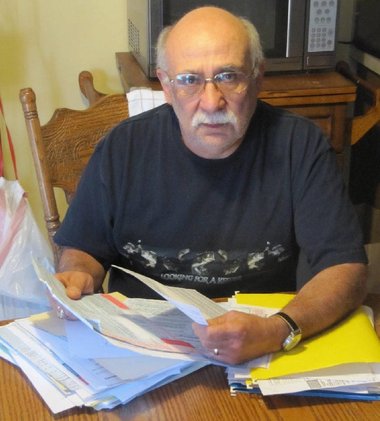 “I called and notified the state of New Jersey that we moved,” he said. “I was told that my claim would continue from the originating state — New Jersey.”

Caputo started his job search before he moved, but it was harder than he thought. He took a part-time job paying $8 per hour with Lowe’s in 2008.

When he got the job, he said, he notified New Jersey.

“I was told by the State of New Jersey that I could continue to collect as long as I reported how many hours I worked part time each week,” he said. “Throughout the time I collected, the amount I received was adjusted based on the hours I worked at Lowe’s.”

Caputo continued to try for full-time positions, including some at Lowe’s, but nothing came through. The part-time hours were sporadic, sometimes only 10 hours per week.

In July 2008, Caputo filed his application for extended unemployment, and he said the state told him he was still eligible to receive benefits from New Jersey.

“At no time in any form of communication did anyone from the state of New Jersey tell me that I needed to shift my claim to the state of South Carolina,” he said. “I continued to receive packets of notices regarding my benefit determination, each time telling me I qualified to continue to receive my benefits.”

Caputo didn’t recall the dates, but he said he remembered two times after receiving his benefits determination that he called New Jersey to make sure his claim was valid. No one said anything was amiss, he said.

On April 22, 2010, he said, he received notice that all his extended benefits were exhausted. He called the state to double-check.

Caputo said he told her he would have talked to South Carolina had he been instructed to do so.

“She again said ‘That’s okay. It’s not your fault. Someone here (the State of New Jersey) should have taken some action,’” he said.

“I received notice that I actually owed the State of New Jersey nearly $17,000 in overpayment of unemployment benefits,” he said.

Caputo spent nearly two years going through the DOL’s appeals process, providing all kinds of paperwork, reviewed by Bamboozled, that showed he reported to the state all his part-time earnings, and his overall employment status, through all this time.

They ruled against him without explanation, he said.

He tried again, citing “agency error,” which means he received benefits because someone, somewhere, within the system, should have determined there was a problem, but no one ever did — despite all Caputo’s timely reports of his status.

Caputo remembered Bamboozled’s successful appeal to unemployment for the Cape May man profiled in this space, and he asked for help.

“They’re trying to squeeze a guy on Social Security, working part time at a local Lowe’s store, helping support one kid in college with a full house including a grown divorced son with two minor grandkids — he has full custody of them and they live with us,” Caputo said. “Having to pay back $17,000 is an unfair and unreasonable burden. We’re barely making it now.”

We asked DOL to clarify the rules about collecting unemployment if you leave the state.

“You continue to collect after you move, but the same rules apply,” a spokesman said. “For example, you must still be willing and available for work, just as you were while collecting in N.J.”

He offered this example: if you were collecting unemployment and left the state to attend college full time, you have taken yourself out of the running for work. You are not available. In that case, your benefits end or are reduced, depending on the circumstances, he said.

If you continue looking for work and your circumstances haven’t changed, meaning you’re still available to work, you are probably still eligible.

“That’s key. Being available,” the spokesman said. “If you say you’re looking for work, but move to Antarctica, it’s a tough thing to argue you are available for work.”

There are occasions where people receive unemployment benefits from New Jersey, and then switch to federal extended benefits — still through New Jersey — when they get jobs, part-time or otherwise, in another state, the DOL spokesman said.

As they transition onto the federal programs, they are still paid the same weekly amount they collected in New Jersey and continue to be listed on state’s rolls while living in the new state.

But, DOL said, there should be reassessments as these people move from one benefits program to the other, and from tier to tier in the federal programs.

“Those people with jobs or part-time jobs can end up earning enough income in that new state where they live that they technically should trigger off New Jersey and the federal extensions, and qualify for new claims and payments through the (unemployment insurance) system in the new state,” he said.

He said there could be scenarios where a person does not realize this change and keeps getting paid through New Jersey until a light bulb goes off somewhere in the system.

But, we wonder — should the benefits recipient be responsible for that light bulb?

We don’t yet know into what category Caputo’s case falls, but we agree wholeheartedly with Caputo’s assessment.

“I trusted the state to give me the right information when I asked the questions,” he said. “I’m not an expert on unemployment benefits.”

DOL said it can’t discuss individual cases, so while we suspect it’s taking a closer look at Caputo’s case, we’ll have to wait to hear from Caputo directly.

“I’m a decent and hard-working citizen. I lived most of my life in New Jersey. Paid all my taxes and tried to make a good life for my family,” Caputo said. “I feel like a criminal.”

He promises to keep us posted, and we’ll let you know when there’s news.