Patricia Booker lost her son to suicide in 2008 after he had a long battle with mental illness.

She laid him to rest at Rosedale Cemetery in Orange, but after paying for the burial, she didn’t have money to pay for a headstone right away.

“The agreement was that I could pay on it and when I got close to paying it off, they would start working on it,” Booker said. “I saved to make payments.” 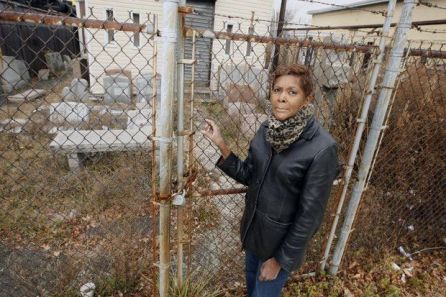 The stone was to be a slant-styled memorial with room for two names. Booker’s son’s name was to be engraved, along with his dates of birth and death, and the other side was to remain blank. The inscription across the bottom was to read “Forever In Our Hearts.”

When she visited the store on that day, she said, the man she had worked with previously — Morris Haren — had fallen ill.

“The workers said they were trying to get the records together and that his sister was going to be taking over his affairs,” she said.

Booker said she received a call from Christine Haren about a month later.

“We spoke several times. She led me to believe the stone was complete because we were supposed to meet so I could see it and make arrangements for its delivery to the cemetery,” Booker said.

Booker said she learned that to have the headstone delivered, Haren would need to contact the cemetery, and Booker would need to come up with an additional $450 for the headstone’s foundation. That bill had to be paid by check or money order to Haren Monument before the monument would be released, she said.

Booker said she told Christine Haren she needed some additional time to come up with the $450, and she was told that was fine.

In July 2012, Booker said, she had a money order in hand, so she said she left a message for Christine Haren to verify the mailing address.

No one returned her call.

She left several messages, she said, but she received no response at all.

“She stopped returning my calls. The phone just went to the voice mail,” Booker said. “I then reached out to the cemetery. They said they didn’t know what was happening with the store either but had several other inquiries.”

On July 13, 2012, Booker sent a certified letter, return receipt requested, to Haren. Booker received the return receipt with Christine Haren’s signature, but “she never reached out to me by mail or by phone to make arrangements to have the monument released.”

That’s when Booker sent all the details in a complaint to consumer affairs in Essex County, where the company was located.

It seems Essex sent the complaint to the state’s Consumer Affairs office, because on Aug. 29, the state sent a letter to Booker saying, “It has been determined that the company has been disolved (sic) and is no longer in operation.”

Booker wasn’t giving up yet.

In October 2012, she filed a complaint with Burlington County’s consumer affairs office, because that’s where Booker lives.

It said: “A review of the complaint indicates that you violated the New Jersey Consumer Fraud Act, N.J.S.A. 56:8-2…” and it detailed the statute.

The letter requested a response from the company by Nov. 19.

“They actually seemed to have better luck,” Booker said. “At one point (Burlington Consumer Affairs) asked me if I wanted the money or the stone. I guess she started ignoring them as well.”

After hearing nothing more, Booker wrote to Burlington’s Consumer Affairs on Feb. 7, 2013.

She recounted her complaint to an investigator.

“He indicated to me that the owner was agreeable to resolve the issue and make arrangements to view the headstone before I accepted it in case of any misspelling or damage,” Booker wrote. “I have never had the opportunity to view it.”

She wrote again to Burlington, requesting a refund instead, given all the time that had passed and that she hasn’t been able to see the stone.

Burlington shared Booker’s comments with Haren in a letter dated Feb. 27, and it requested a reply by March 11.,.

Seems there was no reply, because on April 29, Booker received another letter from Burlington. This one enclosed information on filing a lawsuit in small claims court.

So that’s what Booker tried to do in May.

She filed in Somerset County because that was the location of Christine Haren’s business.

“On my court date I was late because I was stuck in traffic and they dismissed the case,” she said, so she refiled. That was in July.

“The judge looked at the paperwork and said (Christine Haren) was not the one I should be suing,” Booker said. “It should be Haren Monument.”

She then went to talk to an attorney, who told her to simply buy a new monument because the legal costs would be more than the cost of another stone.

That’s when she turned to Bamboozled.

“It is very distressing. I feel so violated when I visit my son’s unmarked grave. How can someone be so insensitive at a very difficult time in one’s life?” Booker said. “If the stone is not damaged I would be happy with that. Otherwise I would like to be reimbursed.”
TRACKING THEM DOWN

The Better Business Bureau gives Haren Monument an “F” rating because it failed to respond to three consumer complaints.

The company was dissolved as of March 31, 2011, according to state records.
Christine Haren Archer also owns another company, Avalon Learning and Training Center, which has addresses in Belle Mead and Hopewell.

We left messages at a telephone number that names Avalon in the recording, but none of our calls was returned. We also tried to reach the owner at two phone numbers listed in public records. One gave a message that said the number wasn’t accepting messages, and the other was disconnected. The Haren Monument number was out of service.

We then looked to see if Haren Monument owned the Newark building where the business was located, or if it was a renter. Then, perhaps, the landlord could help us track down the Harens.

Haren Monuments indeed owned the building, but it was sold to a company called MCH Central in June 2012.

For zero dollars, according to Division of Taxation records.

The company is listed in state filings as a “real estate holding” company, and the owner of MCH? Christine Haren. The company’s address is on the same Belle Mead street as Haran’s other company Avalon.

Without response from Haren, we reached out to Scott Magliochetti, an attorney listed on MCH Central’s state filing as an “authorized representative.”

When we asked about Haren, Magliochetti said he couldn’t talk about her. We persisted, asking if he was involved in the company or if he was just the attorney.

We reached out to the state Division of Consumer Affairs to see the status of the case.
It said Booker’s complaint is still open with the Burlington County office, and the state will work with the county “to try to resolve this matter, if possible, given the circumstances of this business closing its doors,” spokesman Jeff Lamm said.

After our inquiries, a consumer affairs investigator went to the Haren Monument building and saw headstones behind the locked gate, Lamm said.

“We’re not sure if they’re for consumers or samples,” Lamm said. “We’re going to try and find the property owner to get access and inspect the headstones.”

That’s good news to Booker, who hopes other consumers will come forward if they’ve had a problem with Haren Monument.

“They just walked away. It’s very heartless, something like this, when you’re going through the grieving process, and they wash their hands of all responsibility?” Booker said. “My son is lying in a grave that has no headstone. And now I have to fight this other battle? I’m asking for something that’s rightfully mine.”

We’ll let you know what happens.