Howard Himpele started out with what he thought was a money-making invention. 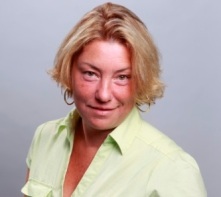 Instead, he said, he ended up the victim of a scam.

Himpele’s creation was a relatively simple one: a display piece for liquor bottles.

He and his business partner enlisted InventHelp, which calls itself an inventor service company, to learn about how to get the invention on store shelves.

On Dec. 2, 2010, the two met at a rep named Nick Stevens at InventHelp’s Woodbridge office, where they gave Stevens the product prototype and paid $300 for services.

But then Himpele’s partner became ill, and he later died, so the invention was put on hold.

Some months later, Himpele’s girlfriend, Patty Ruby, became Himpele’s new partner. In the beginning of June 2012, the couple went back to InventHelp to meet with Stevens.

Stevens didn’t have the prototype on site, so they agreed to meet again on June 14, 2012.

“Nick then informed us he was leaving InventHelp and he was only taking a few select customers with him and he wanted us to be one of them,” Ruby said. “He assured us the invention was going to sell.”

Himpele, Ruby and Stevens all signed a one-page contract — in the name of Stevens’ company, BHimG — for a patent search.

The couple gave Stevens a check for $500 for the patent search, records show. The check was written to Nick Stevens personally, rather than to his company.

The couple said they met with Stevens again on Aug. 2. 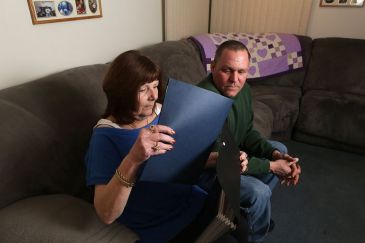 Stevens now wanted to be a half partner on the invention, paying half the cost, Ruby said. The couple agreed.

“He kept saying this was going to be a great invention and when we reached $10,000 (of expenses) the product would be on the shelves,” Ruby said.

They gave Stevens a check for $2,500, but this time, Stevens asked that they leave the name on the check blank, Ruby said.

Records later showed the check was written to “A. Stevens.” Public records show Stevens lives at a Springfield address with his wife, Amy Stevens, but Bamboozled didn’t learn that until later.

The next meeting was Nov. 30, 2012 at the couple’s home. That was because Stevens didn’t have office space yet, Ruby said they were told.

Stevens presented a contract for the couple to sign with BHG, or BattleHill Group, LLC., and he wanted another check, Ruby said.

Ruby said the contract didn’t have an address or phone number, and she didn’t like other parts, so they didn’t sign. Stevens said he would revamp the document, she said.

Ruby said she asked Stevens how much of his own money he had invested in the venture.

“He said, `Oh no, I don’t put in money. I do all the leg work,'” Ruby said. “I said that’s not what he said last time. He said we must have misunderstood.”

The couple gave Stevens another $2,500 check, records show. This time it was written to Nick Stevens.

“And again telling us what a great seller this was going to be. Always having a glass or wine or a beer with us like he was our buddy,” Ruby said. 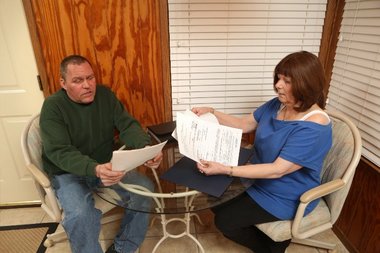 Patty Ruby and Howard Himpele go over their court paperwork related to their case against Nick Stevens, who was supposed to help them get an invention on store shelves. John O’Boyle/NJ Advance Media

5 Boozle-Invention OBoyle.JPG
Patty Ruby and Howard Himpele go over their court paperwork related to their case against Nick Stevens, who was supposed to help them get an invention on store shelves.
John O’Boyle/NJ Advance Media

They gave him another check for $2,500, written to Nick Stevens, Ruby said.

From that time on, the couple said Stevens stopped returning their phone calls.

Until March 2014. Stevens called and said he had been ill but was now back in business, Ruby said.

They set a meeting for April 11, 2014, and Stevens was supposed to bring the prototype.

Stevens came over as promised, but he didn’t bring the prototype. He did ask for another $2,500 check, Ruby said.

As soon as Stevens left, Ruby said, she stopped payment on the check.

“I knew he was scamming us,” she said. “I called and told him I stopped payment. We made it clear we wanted to prototype back. That never happened.”

Ruby and Himpele headed to the Union County Court, Special Civil Part, on April 30, and they filed a claim against Stevens for $8,000.

Stevens didn’t appear, court documents show, and the couple was awarded a default judgment of $8,000, plus court costs.

Getting the money was another matter.

“I called several times to follow up on this because no sheriff had contacted me as promised,” she said. “I was told that there was another case against the same man and they had already gone to the banks I requested. So I paid $17 for what?”

A few days later, the couple received a post card from the court that added another $807.40 to what Stevens owed for court officer fees.

“What was that fee for? I never heard anything from the courts unless I called,” she said. “They charge $807.40 for their fees and they did nothing.”

Ruby said she called the court again on Oct. 31, and the couple received a “failure to comply” letter, also known as an information subpoena, signed by the judge.

It said if Stevens didn’t reply within ten days, “a warrant for the defendant’s arrest shall issue out of this Court without further notice.”

Stevens didn’t reply, Ruby said, so she said she called the court again to ask what was next
“They told me the next step is a warrant for his arrest,” Ruby said.

So per the court’s instructions, the couple sent the judge’s letter with a $41 fee to request what they understood was an arrest warrant, Ruby said.

They received no response.

So Ruby called again on Jan 15. That’s when a court rep explained they don’t actually arrest the subject of the letter, but they send a sheriff to the person’s house with a copy of the letter, Ruby said.

“When they say a warrant for the arrest, to me, that doesn’t mean they deliver a letter to his house,” she said.

Ruby said she was told she’d hear something soon, but no one called.
A CLOSER LOOK

We took a closer look at InventHelp, Stevens and the company names on his paperwork.

We left messages for Nick Stevens at his two known phone numbers, but he didn’t return our calls.

So we looked elsewhere.

InventHelp had some trouble with the Federal Trade Commission in the 1990s, but there have been no major complaints in recent years. While there are some grievances on consumer chat boards, the Better Business Bureau gives the company an A+ rating because it has addressed consumer complaints.

We asked InventHelp about its relationship with Stevens.

“At one point, Nick Stevens was an Independent Contractor, not an employee of InventHelp. He is no longer associated with the company,” a spokeswoman said in an email.

We asked for more about that relationship and how it ended, but the company didn’t respond.

So we looked further.

Battlehill Group is a registered corporation in Florida with Nick Stevens listed as a member. The company is not registered in New Jersey, where state law says you are in violation if you do business in the state without registering.

Stevens has also had other dates in court.

Stevens filed for bankruptcy in 2009, and he has four federal tax liens adding up to $199,399, according to public records.

There was also an interesting judgment against Stevens for $11,000.

The plaintiff, Albert Sutowski, 86, filed suit against Stevens in 2013. His story is very similar to the one told by Himpele and Ruby.

When Stevens left InventHelp — Sutowski said the company told him the man was fired — Stevens promised to still work on the inventions. But that didn’t happen, Sutowski said.

“I said I’ll go through the process of getting my money in court, and he never showed up, and now I have an arrest warrant out for him,” he said.

Just like Ruby and Himpele, but, there’s a misunderstanding about what those civil warrants mean.

A criminal arrest warrant, when executed, results in the defendant going to jail for criminal charges, said Lt. George Kurz of the Union County Sheriff’s office.

Indeed, an arrest warrant, in civil terms, doesn’t mean the alleged perpetrator will be taken away in handcuffs and put in jail.

“A civil arrest warrant can only be executed during court hours because the goal is to produce the person in court so he can comply with a court order,” Kurz said.

Kurz said the warrant can be satisfied by providing the requested information.

So when the court rep Ruby spoke to used the words “sheriff’s officer” when talking about who would visit Stevens about the judge’s order, the rep probably meant a constable.

And Ruby and Sutowski both, like most non-law enforcement types, wrongly understood the judge’s order to mean a handcuffs-and-jail arrest.

Ruby she’s not giving up yet.

“My next thing will be to file criminal charges against him. You call it what you want. To me, it’s theft by deception,” Ruby said.

We’ll let you know what happens.