Victims of Daryl Turner’s travel club scams were promised restitution by the state, and it seems some

victims have gotten their payments, nearly six months after Turner, and his wife, Robyn Bernstein, pleaded guilty to defrauding customers of their phony travel clubs.

But other victims — people who said they filed complaints with the Division of Consumer Affairs and who said they believed they were claimants in the case against Turner and Bernstein — say they haven’t gotten a penny.

The Burlington County Superior Court, which is tasked with sending out the checks, said it has sent out between 750 and 800 checks totaling $771,000.

Bamboozled checked in with three customers who lost money in the scam, and only one said she received a check. The others say they haven’t heard a word.

Turner was sentenced to seven years in prison in January for masterminding the travel scheme, in which customers paid hundreds or thousands of dollars to join travel clubs that promised exotic vacations at discount prices, but the promised deals were never delivered, the state said. The companies, which netted 770 complaints to the state, would shut down and then reopen under other names and in other locations.

• Bamboozled: The latest on travel scam cases and the Sandy “summit” 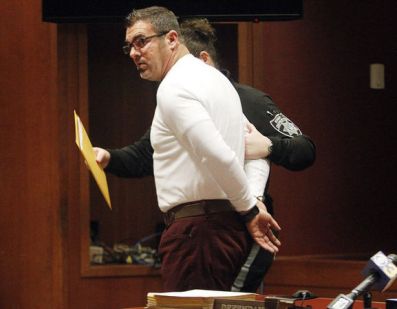 As part of the plea, the two promised to pay more than $2.5 million in restitution.

In September, Bamboozled learned the state was only able to get about $770,000 from an auction of the couple’s assets, a third of what the couple owed.

The sold assets included the couple’s Marlton home, which public records show was worth more than $750,000 when it was seized by the state in 2011. The home sold for $450,000 at auction, the state said.

The state said restitution checks would start to go out a few weeks later.

Customers said they were disappointed. Some had paid as much as $9,000 to the phony travel clubs and they expected to receive back only pennies on the dollar.

But still, they were patient.

Finally, in mid-November, we heard from Alyssa Geibel. The Somerville woman said she was drawn into the scam, and she paid one of Turner’s companies $608 to cover taxes and fees for a free cruse that never happened.

She said she received a $158.52 restitution check from the state.

Geibel said she wasn’t thrilled with the small check, but she said it was better than nothing.

And so far, nothing is exactly what some customers who believe they should have been on the claimant list have received.

Andy Rizzo, who paid $5,200 to join Dreamworks Vacation Club in 2008 or 2009, said he hasn’t received anything yet. And when he contacted Burlington County for information, he said he was given mixed answers.

When he talked to the finance office of the court in October, Rizzo said, the rep confirmed Rizzo was listed as a claimant.

But when he called back a month later for an update, Rizzo said he was told his name wasn’t on the list.

After some looking, the state said there was a memo in Rizzo’s file that said he received a full refund from his credit card company, which Rizzo said never happened.

“This whole investigation is turning into a comedy show and at the end, if I finally receive something, it will be only pennies on the dollar,” Rizzo told Bamboozled in a Facebook message. “Very frustrating.”

Mike Hagen, who paid $3,000 for a membership in Travel Deals, another of Turner and Bernstein’s companies, said he hasn’t heard a word from the state.

After being contacted by Bamboozled, Hagan called to check with the state. That’s when he learned he’s not even on the list, and he has to call another office to find out why.

“Even if I get a thousand bucks back, how much heartbreak and misery did these people bring?” Hagan said. “Justice will prevail, if not here on this earth, then in the afterlife.”

So these customers will have to wait a little longer, and they have some sleuthing to do.

While $771,000 has been collected and disbursed by the state, the Attorney General’s office previously said Turner and Bernstein would be responsible for the remaining balance of roughly $1.8 million, and a civil judgment has been recorded against them.

“They will have to make payments to probation/corrections while they are under supervision,” the spokesman said at the time. “If they ever attempt to sell real estate in the state, or win the lottery, etc. they will have to satisfy the judgment before they can collect any money.”

So if you were a victim, it’s not too late.

If you believe you should be on the claimant list but you haven’t heard about restitution, contact the Burlington County Superior Court and ask to speak to the finance department about a restitution case. Also contact Consumer Affairs about your case.