Planning an overseas family reunion can be an organizational nightmare — especially if the trip is at holiday time.

Sisters Liza and Nina Horowitz were part of a group of nine people representing three generations of a Warren Township family who were to fly from three different airports on two different coasts to Puerto Vallarta, Mexico on Dec. 21, where they’d celebrate the holiday season and the 83rd birthday of their grandmother.

But suddenly, the sisters were out of their fully paid flight.

“My two daughters who are recent college grads booked through Orbitz,” their mom Karen Kessler said in an e-mail when she first contacted Bamboozled the day after the flight was to take place. “They called me last night from the airport in tears. The reservation was cancelled.”

(A note about Karen Kessler. Turns out she’s a sought-after “reputation manager” who has represented clients involved in some of the state’s biggest political and financial stories. In fact, we had never dealt with Kessler before, and didn’t realize her resume until after we stepped in to help her daughters.) 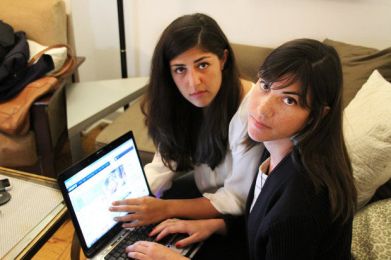 Kessler said Orbitz, an online travel company, was not helping. While her daughters tried to rebook from the airport — unsuccessfully — Kessler said she spent five hours calling airlines and finally found a United flight that would leave two days later.

“I think they owe my kids a refund and to pay me for the costs of rebooking them at the last minute, which was over $1,500 a ticket,” she said. “These are young adults, and this money represents a huge expense for them. Can you help?”

We got on the case.

Liza Horowitz said because flights over the holidays were so expensive, they did lots of legwork last summer to find a good deal. Orbitz offered a flight with one stopover that would cost $1,907.16 for two round trip tickets, including travel insurance, which saved them $400 compared to a direct flight.

“This trip was very costly for us but since it was such an important birthday for my grandmother, we saved up in order to book this, knowing how memorable the trip would be,” Liza Horowitz said. “We even had seats confirmed through Orbitz and paid everything in full back in July.”

The Horowitz sisters went to the airport with the full expectation that their trip was beginning.

“When we presented our confirmation at the check-in counter, we were told that Orbitz cancelled our reservations and that our confirmation number and receipts were meaningless,” Liza Horowitz said. “The airline explained that while Orbitz gave us confirmation e-mails, Orbitz never confirmed our seats with the airline.”

The first leg of the flight was ticketed by Delta but run by AeroMexico, while the second leg was AeroMexico. Both were fully booked, they said they were told.

The sisters told the ticket agents there must be a mistake, but the Delta agents said this kind of thing has happened before with Orbitz, Liza Horowitz said. AeroMexico reps also told the sisters the mistake was on Orbitz.

While at the airport, the Delta agent said no other seats were available, but suggested they contact other airlines directly because sometimes not all seats show in the Delta computers. The reps said they’d be reimbursed for whatever they booked, Liza Horowitz said.

The sisters took a taxi home, and they and their mom tried to find seats, any seats, to get them to their family reunion.

“It felt like we were in a horrible customer service ping pong match,” Liza Horowitz said. “Delta, AeroMexico and Orbitz were all blaming each other and pointing fingers.”

Horowitz said she felt it was Orbitz’s responsibility.

“I gave my money and trust to Orbitz. The buck has to stop with them,” she said.

Their mom was eventually able to get the sisters a United flight, but it left two days later and would cost $3,144.82 for the two.

“Being with my family in warm weather was great, but we spent a lot of time e-mailing, Tweeting and trying to call Orbitz to get our flights refunded,” Liza Horowitz said. “We were all shocked that Orbitz took no responsibility. It is hard to enjoy a vacation when you feel like you were just robbed of $5,000 and no one cares.”

After several phone calls, Liza Horowitz e-mailed Orbitz on Dec. 23 — while she was on the trip — to ask about the refund.

A rep said she couldn’t find a “definitive answer” for what happened, but she thought Delta would refund the tickets that were not used. She also suggested the error was not on Orbitz.

“According to what Delta can see on their side, there was an ‘irregular operation’ on the outbound flight from JFK to Mexico City. This indicates a delay or cancellation due to weather or mechanical issues, and has nothing to do with service operations by Delta, AeroMexico, or Orbitz,” the rep said.

Next, the rep said Delta claimed it was not Delta’s error, and compensation would need to come from AeroMexico, which Orbitz was planning to contact.

Liza Horowitz reiterated her request for both sets of tickets to be refunded, plus the $400 cost of two round trip cab fares to and from the airport. She provided copies of receipts.

The Orbitz rep said she could see “no reason why AeroMexico would say that Orbitz did not confirm your flights.”

“Liza, I do not want to waste time pointing fingers, but I can assure you that Orbitz did not make any errors on this reservation,” the rep wrote, saying a refund for the initial tickets was possible, but a refund for the new, more expensive tickets “can be a little bit trickier.”

“This is not acceptable. I trusted that when I get an Orbitz confirmation and pay Orbitz, you will stand behind this,” she wrote. “I want the total amount refunded.”

There was no response, so after Horowitz returned from her trip, she wrote again on Jan. 2 asking for an update. Orbitz customer service asked for more time.

That’s the same day Bamboozled reached out to Orbitz though phone messages and e-mails, but no one responded.

There was still no answer by Jan. 6, so Liza Horowitz e-mailed Orbitz again, saying she still hadn’t received a refund for the initial tickets, nor was there an answer on the rest of her refund request.

The rep said she was still working on it.

We reached out again, but again, no response.

Then, before the day was over, there was a credit from Delta on Liza Horowitz’s credit card for $1,794.98 — the initial cost minus the travel insurance premiums.

We contacted Orbitz again, but again, no response.

So Liza Horowitz tried again, thanking Orbitz for the Delta refund but asking about the rest of her refund request.

The Orbitz rep responded: “Please understand that Orbitz will not be covering the difference, since was not actually our error.”

Bamboozled reached out to Orbitz one more time by phone and e-mail, asking for some kind of response — even if it was to say “no comment” — but again, no response.

In the meantime, Liza Horowitz wasn’t done giving Orbitz a piece of her mind.

“When I purchased the ticket from your company. I paid one bulk fee to Orbitz,” she wrote to the company. “When you advertise, where does it say, “Pay us and hope we stand behind this fare?”

GETTING TO THE BOTTOM

Without response from Orbitz, we reached out to Delta.

Delta said it “fulfilled its responsibility by refunding the flight,” and it couldn’t comment on any promises or statements made by the gate agents.

That wasn’t a shocker, but this was: Delta said its records show the issue wasn’t that seats weren’t confirmed, but that the first leg of the flight from JFK to Mexico City was cancelled by AeroMexico the day before departure. Delta also said it informed Orbitz of the cancellation on Dec. 20, the day before the scheduled departure.

The Horowitz sisters said they were never informed of a cancellation.

“When we were at the airport, we were on the phone with Orbitz and they said our seats were confirmed,” Liza Horowitz said. “No one told us any flight was cancelled. AeroMexico even said we could be on stand-by, but how could we fly stand-by if it was cancelled?”

We reached out to AeroMexico, and it called Horowitz, and Bamboozled, very quickly.

“I will find a way to compensate them,” a spokeswoman said. “I already offered two tickets but they declined, saying their trip was a one-time trip. I will look at this and see what else I can do.”

Liza Horowitz is grateful for the consideration, but she still feels Orbitz is the responsible party.

“It’s mind-boggling,” she said. “I hope no one else ever books with Orbitz and has a problem like this. Orbitz just doesn’t care.”

We’ll let you know if Orbitz ever returns our calls, and if AeroMexico offers any further compensation.